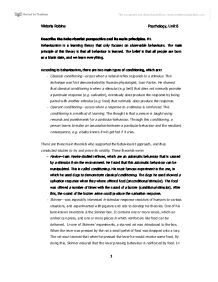 Describe the Behaviourist perspective and its main principles. P1

Describe the Behaviourist perspective and its main principles. P1 Behaviourism is a learning theory that only focuses on observable behaviours. The main principle of this theory is that all behaviour is learned. The belief is that all people are born as a blank slate, and we learn everything. According to behaviourism, there are two main types of conditioning, which are: � Classical conditioning-occurs when a natural reflex responds to a stimulus. This technique was first demonstrated by Russian physiologist, Ivan Pavlov. He showed that classical conditioning is when a stimulus (e.g. bell) that does not normally provoke a particular response (e.g. salivation), eventually does produce the response by being paired with another stimulus (e.g. food) that normally does produce the response. � Operant conditioning-occurs when a response to a stimulus is reinforced. This conditioning is a method of learning. The thought is that a person is taught using rewards and punishments for a particular behaviour. Through this conditioning, a person learns to make an association between a particular behaviour and the resultant consequence, e.g. a baby knows it will get fed if it cries. There are three main theorists who supported the behaviourist approach, and they conducted studies to try and prove its validity. ...read more.

They were also able to demonstrate that this fear could be generalized to other white, furry objects. The ethics of the experiment are often criticized today, especially because the child's fear was never deconditioned. This perspective is relevant to health and social care practice in a number of different ways, but I will discuss how it was relevant in my placement-a setting in which I was required to work with children and teach. Operant conditioning is often used in schools, as it is a very simple way of teaching children the difference between right and wrong. Children can be encouraged to behave by being rewarded every time they do something good. I often put this into practice with children at my placement, and a lot of the time it was something that actually happened inadvertently. One of my main examples is the use of praise in a classroom, which I used on a regular basis along with many of the teachers. Praise is a very positive agent that needs to happen daily. Many kids don't hear enough praise when they are doing something right, especially the struggling kids or kids that don't have a positive family life. ...read more.

I could tell how great it makes them feel that another student has something positive to say about them. Be that as it may, I believe that praise has to be used in conjunction with correction or criticism in order for it to be effective. Therefore, Mr Collins also had consequences for behavior that disrupted the class. This would include making children sit in the corner of the classroom, so that they couldn't see the whiteboard when he was reading a story. He would also punish them by not letting them go outside to play at lunchtime, or by making them stay in the classroom and read when everyone else was playing on the computers. A lot of children don't respond well to punishent. They don't like the sense of an authoratitive figure telling them what to do, and will therefore try to rebel against the demand. However, punishment doesn't have to take that turn. Most teachers have been trained to how to use effective punishment. This means it happens immediately and is delivered in a matter-of-fact tone. By punishing a student for certain behaviour, they will know not to do that behaviour again. They'll feel upset at having their privileges taken away from them, and will therefore learn to respect rules and authority. ?? ?? ?? ?? Viktoria Robins Psychology, Unit 8 1 ...read more.