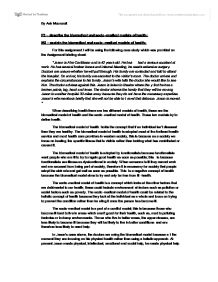 P3 - describe the biomedical and socio-medical models of health: M2 - explain the biomedical and socio-medical models of health: For this assignment I will be using the following case study which was provided on the Assignment briefing sheet: ''Jason is Afro-Caribbean and is 42 years old. He has had a serious accident at work. He has several broken bones and internal bleeding, he needs extensive surgery. Doctors are unsure whether he will pull through. His family are contacted and told to attend the hospital. On arrival, his family are escorted to the visitor's room. The doctor arrives and explains the circumstances to his family. Jason's wife tells the doctor she would like to see him. The doctor advises against this. Jason is taken to theatre where they find he has a broken pelvis, leg, hand and knee. The doctor informs the family that they will be moving Jason to another hospital 30 miles away because they do not have the necessary expertise. Jason's wife mentions briefly that she will not be able to travel that distance. Jason is moved. '' When describing health there are two different models of health, these are the biomedical model of health and the socio-medical model of health. These two models try to define health. The biomedical model of health holds the concept that if an individual isn't diseased then they are healthy. The biomedical model of health is adopted most of the National health service and most health care providers in western society, this is because as a society we focus on treating the specific illness that is visible rather than looking what has contributed or caused it. ...read more.

Socio-medical model of health would looks at Jason as a whole and would assess his needs, his physical need is to get better and to repair his bones, his intellectual needs are to get back into work and be stimulating his mind again, his emotional need is to accept what has happened and to come to terms with the trauma and his social needs are to see his friends and family again. Using the biomedical model the doctor would be trying to diagnose an illness or cause for Jason not to be eating, for example, a surgery complication or a reaction to the anaesthetic. The doctors need to address Jason as a whole and if they did they would see his other needs. If Jason is left as he is he could become lonely and depressed, this could be another reason why he is not eating, he could also begin to lose faith and may give up trying to get better. M2 - explain the biomedical and socio-medical models of health: For many years there have been many arguments about the cause of mental disabilities such as anxiety and depression, the first argument is that there is an imbalance of chemicals in the brain, such as, serotonin or whether it's caused by environmental factors such as increased stress or fear. Both could be a cause for depression, an imbalance of anything in life could cause something to happen and life events could definitely be a factor as if something bad happens to someone it is bound to affect them in some way or another. ...read more.

The education wouldn't be a priority for the biomedical doctor, as the education wouldn't be affecting the body. Even though the lack of schooling could be detrimental to the individuals emotional and social health, this wouldn't be considered until the person actually has a problem such as depression. Once the individual has depression it would then be treated. However, the socio-medical model of health would look at everything in the individuals life and look at what Is causing the individuals problems, the lack of food wouldn't be treated just be giving them food, but maybe, provide them with the tools and equipment to grow their own food. Otherwise, each person would be coming back to the doctor every day for food. The socio-medical would also then consider providing education as if they were educated they may find it easier to support them self which would keep them happy and help prevent psychological and emotional problems. In general I feel that the social-medical model of health is best because it consider everything and the person as a whole, it can also consist of more natural remedies which could be of more help in places such as Africa as they might not have the infrastructure to provide medication. Biomedical model of health is of use because it treats the problems but doesn't really provide much prevention as the poor housing conditions could result in other conditions such as respiratory problems. Therefore; looking at the person and the problem as a whole would be of much more use. ...read more.

The writer clearly understands the key differences between the two models of health. There is evidence of excellent application to specific case studies and some analysis.
Star rating: 4