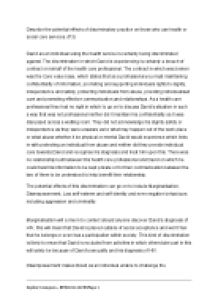 ﻿Describe the potential effects of discriminatory practice on those who use health or social care services. (P3) David as an individual using the health service is certainly being discriminated against. The discrimination in which David is experiencing is certainly a breach of contract on behalf of the health care professional. The contract in which was broken was the Care value base, which states that as a professional you must maintaining confidentiality of information, promoting and supporting individuals rights to dignity, independence and safety, protecting individuals from abuse, providing individualised care and promoting effective communication and relationships. As a health care professional they had no right in which to go on to discuss David?s situation in such a way that was not professional neither did it maintain his confidentiality as it was discussed across a waiting room. They did not acknowledge his dignity safety or independence as they were unaware as to what may happen out of the work place or what abuse whether it be physical or mental David would experience which links in with protecting an ...read more.

David as an individual will feel that no one is there for him to either just listen, be a shoulder to cry on or to support him or any claims towards him. This for David will be a very emotional rollercoaster as he will not really have a sense of belonging he will not know where he fits in to society or what role he plays which is Marginalisation. If David?s discrimination goes on to spread further round groups of individuals within his community and society he will totally be disempowered. David will go on to find himself at the lowest point. This is when a health care professional is most important, as someone to care for David and to help him over his struggles. A health care professional should not abuse this opportunity because this is the career choice they chose for a reason, they want to not only treat people but they also want to deliver a level of care for a person. ...read more.

If David?s abuse goes as far as to really break him as a person, David could have the personality switch of not welcoming the community which surrounds him but instead it will turn him against the community against society and against the people who have hurt him the most. This will mean that David may experience negative behaviour which may include aggression or criminality. David will face this because of how people are treating him, he will see it as why should he give anything back to society, why should he accept people for who they are when there is no one there to accept him or welcome him into society. This will be based upon the fact that David has been subjected to constant unfair treatment, unfair dismissal day after day which will slowly become intolerable for David as it will slowly lower his self-esteem and eventually go on to destroy him as a person. This will all be shown through anger, hurt, frustration and will be expressed through some form of aggression towards another person or group of people. ________________ Sophie Youngson ? BMC101116785Page ...read more.

This essay discusses the effects on the individual of someone discovering that they were HIV positive. Although the effects are well written and discussed, it does not really deal with the aspect of discrimination in the work place correctly.

It could be enhanced by explaining the case study better and understanding discrimination in a little more detail. This would allow a more thorough explanation and improve the essay.