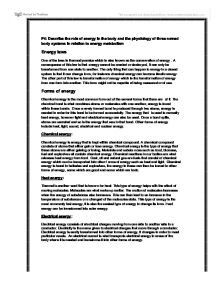 P4: Describe the role of energy in the body and the physiology of three named body systems in relation to energy metabolism Energy laws One of the laws is thermodynamics which is also known as the conservation of energy. A consequence of this law is that energy cannot be created or destroyed, it can only be transformed from one state to another. The only thing that can happen to energy in a closed system is that it can change form, for instance chemical energy can become kinetic energy. The other part of this law is transformation of energy which is the transformation of energy from one form into another. This form might not be capable of being measured or of use. Forms of energy Chemical energy is the most common form out of the several forms that there are of it. The chemical bond is what combines atoms or molecules with one another, energy is found within these bonds. Once a newly formed bond is produced through two atoms, energy is needed in order for this bond to be formed successfully. The energy that is used is normally heat energy, however light and electrical energy can also be used. Once a bond splits, atoms are secreted and so is the energy that was in that bond. Other forms of energy include heat, light, sound, electrical and nuclear energy. Chemical energy: Chemical energy is energy that is kept within chemical compound. A chemical compound consists of atoms that either gain or lose energy. Chemical energy is the type of energy that these atoms are either gaining or losing. Materials and substances such as food, biomass, fuel and explosives all contain chemical energy. Chemical reactions in our bodies are what releases heat energy from food. Coal, oil and natural gas are fuels that consist of chemical energy which can be transported into other forms of energy such as heat and light. ...read more.

It's what carries information through the cells to various parts of the body and external environment. Transportation of substances is the main function of the blood. The blood is used to transport: * Oxygen from the lungs to the tissues and carbon dioxide from the tissues to the lungs * Nutrients to the tissues and cell wastes to organs such as the kidneys so that they can be excreted * Hormones to the required body organs * Heat that is formed in active tissues is transported through the blood to less active tissues. * Antibodies to areas of the body that are infected The blood is made up of a clear fluid called plasma. The blood is made up of about 55% of plasma fluid and about 45% of blood volume. The plasma is made up of water and substances such as plasma proteins, inorganic salts, nutrients, waste substances, hormones and gases. Plasma, red blood cells and white blood such as lymphocyte, neutrophil and eosinophil are all part of the blood. Ethrocytes consist of haemoglobin, which is an essential in order for human survival. Haemoglobin is a protein that contains iron and is important as it forms strong chemical bonds when combined with oxygen when in an environment that has a high concentration of oxygen. The chemical bond that is formed is called oxyhaemoglobin. Oxy haemoglobin is produced within the blood inside lung capillaries and it delivers oxygen to the tissue cells. However when haemoglobin is in an environment where oxygen concentration levels are low, the oxygen is given body cells. At this point haemoglobin has reduced. Respiratory system The respiratory system supply's the blood with oxygen in order for the blood to deliver oxygen to all parts of the body which is done through breathing. When we breathe, we inhale oxygen and exhale carbon dioxide. Respiration is achieved through the mouth, nose, trachea, lungs, and diaphragm, many smaller tubes which connect to tiny sacs called alveoli. ...read more.

When food that is rich in lipids is consumed, bile is released by the gall bladder into the small intestine. Another function of the liver is that it takes glucose and other sugars from the blood that it has received from the small intestine and turns these into glycogen, which is then stored. The pancreas: The pancreas is situated near the duodenum and it is found between the intestines and the stomach. The pancreas releases pancreatic juices which are filled with enzymes and also alkaline salts which help neutralise the stomachs acidic secretions. These juices interrelate with nutrients such as protein, fat and carbohydrates and are responsible for breaking down complex food molecules and turning them into amino acids, glucose and similar simple sugars and also fatty acids and glycerol. Salivary glands: There are three types of salivary glands which release saliva into the mouth. Saliva contains salivary amylase, this is what starts the carbohydrates being digested. It also helps keep the mouth wet and in the production of the food bolus. Role of the digestive system in breakdown and absorption of food materials (ingestion, absorption and egestion): Ingestion is the name given for the consumption of food. Food is made from large complex molecules which consist of protein, carbohydrate and fat that cannot travel through the alimentary canal. The transformation of these complex molecules into simple soluble molecules allows absorption to take place in the bloodstream and allows metabolic processes to occur. Substances that have not been absorbed are known as waste material and these leave the body through the anus, this is egestion. Peristalsis: Peristalsis is the process where food and chyme travel through the alimentary canal. According to stretch and whitehouse (2007) 'behind the bolus or chyme the inner circular muscle contracts (and the longitudinal muscle relaxes) pushing material in front of it.' At the front of the material the circular muscle is what relaxes and the longitudinal muscles is what contracts and it is what opens in order to receive food. ...read more.