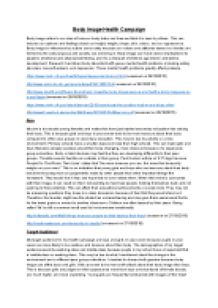 Transfer-Encoding: chunked ﻿Body Image Health Campaign Body image refers to our idea of how our body looks and how we think it is seen by others. This can include our opinions and feelings about our height, weight, shape, skin, colour, and our appearance. Body image is influenced by culture and society because our values and attitudes toward our bodies are formed by the cultural group and society, we are living in. Body image can have severe implications for people?s emotional and physical well-being, and it?s a vital part of children age eleven and twelve development. Research has linked body discontent with grave mental health problems, including eating disorders, low self-esteem, and depression. These mental health problems greatly affect preteens. https://www.nimh.nih.gov/health/topics/depression/index.shtml (accessed on 28/10/2015) http://www.ncbi.nlm.nih.gov/pmc/articles/PMC1950124/ (accessed on 28/10/2015) http://www.ideafit.com/fitness-library/body-imagethe-body-image-we-see-and-feelthe-body-image-we-see-and-feelw (accessed on 28/10/2015) https://www.nimh.nih.gov/about/director/2015/accentuate-the-positive-rhythm-and-blues.shtml http://www2.uwstout.edu/content/lib/thesis/2010/2010dittberners.pdf (accessed on 28/10/2015) Aim My aim is to educate young females and males that have just started secondary education into valuing their body. This is because girls and boys in year seven tend to be more insecure about their body compared to other year groups in secondary education. This may be due to puberty or a new environment. Primary schools have a smaller classroom size than high schools. This can make girls and boys that were already cautious about their body changing, more insecure because of a larger peer group subculture. Early or late bloomers may feel like they are developing differently to their peer groups. Therefore would feel like an outsider in their group. Paul Hudson article on ?9 Things Insecure People Do That Ruins Their Lives? states that ?the more insecure you are, the more that insecurity weighs on your mind.? This is an indication that young girls and boys who are insecure about their body would be focusing more on judgements made by other people than other important things like homework. They would live in fear and hope that no one notices them. ...read more.

I would achieve this part by creating a PowerPoint. My presentation would consist of slides about eating disorders, obesity and the effect of low self-esteem. I would also would explain the activities and who would be the leader conducting it. I?ve mentioned in my objective that I would have people from my Local Youth Club leading different sessions. This is because there are ninety year seven pupils in my school. Building Self-Esteem Good self-esteem is significant for everyone because it helps you retain an optimistic viewpoint on life and makes you feel satisfied of the person you are, both inside and out. Most children that are in year 7 with good self-esteem find life much more gratifying. They find it easier to make relationships with peers and adults find it stress-free to deal with errors or distresses, and are more likely to stick with an assignment until they flourish. Building self-esteem is an activity to increase students? confidence. In this session the pupils would be put into subgroups of five; there would be six pupils in each group. Later on, each group would be given an envelope with a task to act out in front of their peers. The task would all be different. To make sure no one is left out in the small play; a hat with slips of papers that has different roles, such as a police officer or nurse would be given to each student to randomly pick out. Then as a group the pupils would have to fit the roles that were picked random by students to the scene given to their group. If there is conflict among the group it would be resolved by the teacher or the team leader. The child that has disrupted others from contributing would be dealt with using behaviour strategies, such as demerits and detentions. The child would be more likely to behave if the warning came from an authority figure. All the groups would be given thirty minutes to rehearse their scene. ...read more.

The pizzas would not show. The poster images are of pizzas that are all different shapes and sizes. This would show that it is perfectly fine to be skinny or little heavy on the stomach. The heading says that ?beauty comes in all shapes and sizes.? this would hopefully point out whatever shape or size you are, you are still beautiful. This might be referred to saying that beauty comes within, it is all about inner beauty rather than outer. Success Criteria The strategies I have to measure success is questionnaires. I would hand out two questionnaires; one of the questionnaires would be one to see if the student have insecurities and the reasons why. The other questionnaire would be feedback. This is important because the feedback enables me to know if my campaign about body image issues was useful and if it had an impact. I think this campaign I have constructed would be a success, with 74% of the pupils valuing their body image more. 26% opinions might not have changed due to them being confident about their body image or they need a professional?s advice on valuing their body. This may be because the pupil has lost faith and views themselves as ?worthless? for a really long time. The aim of my campaign was to educate children into valuing themselves. I know that some of the pupils would need therapist because they would need more than a day to learn to value themselves. I predict that more than half the pupils in year seven would learn about valuing body image from the campaign. I don?t think there would be any unintended impact on my campaign. This is because my campaign is to educate pupils in year seven about valuing themselves. I would like to expand my campaign to other year groups in my school, but I would focus on year seven. This is because they are seen to be the most insecure year group due to the change of schools and it would be a smaller sample size. ...read more.