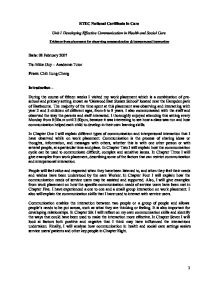 BTEC National Certificate in Care Unit 1 Developing Effective Communication in Health and Social Care Evidence from placement for observing communication & interpersonal interaction Date: 08 February 2007 To: Mike Guy - Academic Tutor From: Chih Lung Cheng Introduction - During the course of fifteen weeks I visited my work placement which is a combination of pre- school and primary setting known as 'Oakwood East Sussex School' located near the Hampden park of Eastbourne. The majority of the time spent at this placement was observing and interacting with year 2 and 3 children of different ages, from 6 to 8 years. I also communicated with the staff and observed the way the parents and staff interacted. I thoroughly enjoyed attending this setting every Monday from 8:30a.m until 3:30p.m, because it was interesting to see how a class was run and how communication helped each child to develop in their own learning skills. In Chapter One I will explain different types of communication and interpersonal interaction that I have observed while on work placement. Communication is the process of sharing ideas or thoughts, information, and messages with others, whether this is with one other person or with several people, at a particular time and place. In Chapter Two I will explain how the communication cycle can be used to communicate difficult, complex and sensitive issues. In Chapter Three I will give examples from work placement, describing some of the factors that can restrict communication and interpersonal interaction. People will feel value and respected when they have been listened to, and when they feel their needs and wishes have been understood by the care Worker. In Chapter Four I will explain how the communication needs of service users may be assisted and supported. Also, I will give examples from work placement on how the specific communication needs of service users have been met in Chapter Five. ...read more.

The environment in which I carried out my interview is vital to how effective the communication is. Which is why I found a small table outside the computer' room to interview Helen, where distractions would be minimal and where we could hear each other speak. I tried to interview Helen outside the classroom as to be near to the group so that she wouldn't feel isolated, but she kept looking around distracted by the noise from the class. Once I got seated with her, I said hello to Helen, which she responded to, and started the conversation off by using a closed question to ask if she felt comfortable for me to interview and share a one to one interaction with her. She said it was fine for me to interview her, which encouraged me to spend more time with Helen, to take an interest in her life as I knew she felt at ease round me. As the conversation continued I began asking open questions, to encourage and provide an opportunity for a broad- ranging response. I also demonstrated a number of verbal and non-verbal skills as different types of communication methods. Throughout the interaction I spoke slowly and softly to Helen, so that she could interpret what I was saying, but I didn't want her to feel intimidated by the tone of my voice. I was also aware that I could scare the listener, if they believe that I am shouting, whilst having a conversation with them. This is how Helen and I communicated verbally, by not shouting at each other, or raising our voices, instead by talking calmly and relaxed. To show that I was listening to Helen I used prompts, by making noises for her to feel as though I was listening and interested in the conversation. Furthermore, during the interview I used different forms of non-verbal communication, by expressing body language to illustrate my thoughts and feelings, which I could not verbalise. ...read more.

To do this first talk to only a few children instead of the whole class. Also the teacher should continue to ask open-ended questions and become enthusiastic by using interventions e.g. "Wow!" This will help the child to continue to talk as she feels you are interested. Belonging and affection needs - A child who gets upset when no other child in the class is interested in playing with her. Communication skills are essential to resolve this problem. If the staff see that the girl is playing with something, they should make it obvious to the class that they want to play with the girl, as it looks like fun. This will attract others attention, as not only do the children like playing with other children, but they also like playing with staff. Other children will become intrigued of what the staff are making all the fuss about. Resulting in the girl feeling a sense of belonging. Emotional and physical safety - A new girl starts attending Ms. Morse's class, her parents come with her and talks to the teacher. When her parents leave she begins to cry because she knows no one and everyone looks like a stranger to her as they all stand there staring at the new girl. The new girl feels threatened by the other children and lonely. In order to overcome Ms. Morse needs to first introduce the girl to the class so that she feels welcomed and then use her conversational skills to help her feel safe and welcome. Physical needs - Some children needed help to undo their buttons on their uniform, the teacher used her good communication skills by telling the children to try and undo the buttons themselves, if they couldn't do it then they could go to her, she said this in a very calm and relaxed manner without even slightly raising her voice, she also said it by making use of good eye contact, use of good eye contact helps regulate the flow of communication and signals interest and respect in others. ...read more.