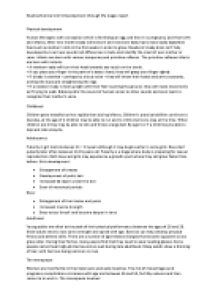 ﻿Ewelina Steinke Unit 4 Development through life stages report Physical development Human life begins with conception which is fertilising an egg, and then it is pregnancy and then birth and infancy. After nine months baby will be born and new born baby has to take easily digestible food such as mother?s milk in the first weeks in order to grow. Newborn?s baby brain isn?t fully developed but can hear sounds tell differences in taste and identify the smell of own mother or carer. Infants are born with various temporary and primitive reflexes. The primitive reflexes infants are born with include: ? A newborn baby will turn their head towards any touch on the cheek. ? If you place your finger in the palm of a baby?s hand, they will grasp your finger tightly. ? If a baby is startled ? perhaps by a loud noise ? they will throw their hands and arms outwards, arching the back and straightening the legs. ? If a newborn baby is held upright with their feet touching the ground, they will make movements as if trying to walk. Babies prefer the sound of human voices to other sounds and soon learn to recognise their mother?s voice. Childhood Children grow steadily but less rapidly than during infancy. ...read more.

sentences, and then this develops into ability to ask questions, knowledge of words grows really quickly 4 years: children begin to use clear sentences that can be understood by strangers 5 years: children can speak using full adult grammar. Social development Infancy 1. At 2 months start to smile at human faces 2. 3 months- respond to when adults talk 3. 5 months-can distinguish between familiar and unfamiliar people 4. Make first relationships ? emotional attachment to carers 5. Play alongside other children Childhood 1. Emotionally attached and dependent on adults that care for them 2. Begin to learn social roles and behaviour 3. Co-operate playing with other children 4. Becoming increasingly independent 5. Begin to form friendships 6. Form social networks of friends who like and agree with each other Adolescence 1. Copy styles of dress, beliefs, cultural values and behaviours of their own network of friends 2. Coping with development of their sexuality 3. Social transition to full independence from the family Adulthood 1. Friendship networks continue to be very important 2. Formation of adult sexual partnerships 3. Need to find employment/establish a career 4. Marriage and parenthood 5. Adults in their forties and fifties experience time pressures that may limit their social activity 6. Splitting time between work, care of parents, other family commitments and wider social activities Older adulthood 1. ...read more.

The heart is less efficient at pumping blood 3. Blood pressure rises 4. Nutrients from food are not absorbed as well as in earlier life 5. Breathing becomes less efficient Two theories of ageing Activity theory Havighurst says that if people keep involved with others in social network they will be more satisfied with life. But the criticism of this theory says that some individuals prefer to live alone and be independent. Not everyone may be able to go out and join activities. Disengagement theory Cumming and Henry developed this theory. They said that social structures encourage older people to withdraw from society so that younger people could take their place. Ageing is seen as a negative withdrawing from society. For many this happened when they stop work. In the 1960s many woman didn?t work and at that time according to this theory their role in society finished when their husband died. Criticisms of this theory are that: 1. Many older people play an active part in their community and may continue to work in a part time job 2. The theory denies that individuals have a choice 3. This theory devalues older people One of the most obvious signs of ageing are the lines and wrinkles which appear on the skin. Hetherington, A., Rasheed, L., & Wyatt, L. (2007). BTEC National Health & Social Care. London: Hachetter Livre UK. Strech, B. (2010). Health & Social Care Level 3 BTEC National . Edinburgh: Pearson Education Limites. ...read more.