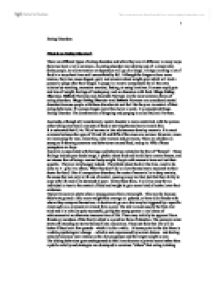 Eating Disorders What is an Eating Disorder? There are different types of eating disorders and while they are all different, in many ways they also have a lot in common. An eating disorder may develop out of a simple diet. Some people, to relieve tension or depression will go on a binge. A binge is eating a lot of food in a very short time until uncomfortably full. Although the binges relieve some tension, they also cause disgust, guilt, and concern about weight gain which will lead a person to purge after their binges. A purge is a way to compensate for all the extra calories by vomiting, excessive exercise, fasting, or using laxatives. It causes rapid gain and loss of weight, feelings of inadequacy, and an obsession with food. Binge Eating Disorder, Bulimia Nervosa and Anorexia Nervosa are the most common forms of eating disorders. Binge-Eating Disorder and Bulimia Nervosa are considered mental disorders because people with these disorders do not feel like they are in control of their eating behaviour. If a person binges more than twice a week, it is considered Binge-Eating Disorder. The combination of bingeing and purging is called Bulimia Nervosa. Anorexia, although still considered a mental disorder is more controlled, with the person either taking very small amounts of food or starving themselves to remain thin. It is estimated that 0.5 to 1% of women in late adolescence develop anorexia. It is most common between the ages of 10 and 30 and 90% of the cases are women. However, cases are increasing for men, minorities, older women and pre-teens. There are children as young as 8 showing concerns and behaviours around food, and up to 50% of these youngsters are boys. Anorexia is associated with feelings and behaviours related to the fear of "fatness". These feelings include poor body image, a phobia about food and its ability to create fatness, and an intense fear of being a normal body weight. ...read more.

The parents are often older and are reported by the child as demanding, placing emphasis on their educational or athletic achievements instead of them as a person. This is the parent's attempt of showing love. They feel that if they were to gain 99% in a test, they would be held accountable for not having got it all right. Their own body becomes their greatest achievement. Getting anorexia could be an unconscious choice, but by showing rigid control of their body and not eating with their family, the anorexic demonstrates independence in the only way they can. As a result, looking back on their early life, many anorexics remember growing up trying to please others and meet their expectations. They usually succeed, since many are high achievers and good students, anxious to please their parents or teachers and earn their approval. These are the children who are described by teachers as well behaved and conscientious, never causing trouble or disruption at school, and never giving their parents any of the usual forms of adolescent rebellion, such as rudeness or defiance. Evaluation These ideas show that it is perfectly reasonable to assume that the social pressures of being a young person in today's society can be associated with the onset of anorexia so if today's culture is a risk factor for anorexia, and wanting to be thinner precipitates the illness, why is it that out of all the women and girls who diet at some time in their lives, only some go on to become anorexic? A youngster growing up in a strict family with high expectations feels that she has no control over herself as her parents are taking away her independence and are basically mapping her life out for her. The only thing left is her body, so she uses this to control what she eats as an achievement of her independence. This can backfire on the anorexic, making the parents more overbearing than before. ...read more.

Part of this process would include building self-esteem. For those anorexics who are too far gone for these therapies to benefit them, a stay in hospital will apply where they can be force-fed under the powers of the Mental Health Act, since severe emaciation destroys the ability to think rationally, thus making any form of therapy very hard to do. Anyway, many therapists believe that it is impossible to carry out psychotherapy with an anorexic person unless weight has first been restored. ( The National Centre For Eating Disorders August 1999). Medical Treatment Scientists have found that the neurotransmitters serotonin and norepinephrine, (chemical messengers which control hormones in the brain) function abnormally in people affected by depression. Researchers funded by NIMH (National Institute of Mental Health) have recently learned that these neurotransmitters are also decreased in extremely ill anorexia and bulimia patients and long-term recovered anorexia patients. Because many people with eating disorders also appear to suffer from depression, some scientists believe that there may be a link between these two disorders. In fact, new research has suggested that some patients with anorexia may respond well to the antidepressant medication fluoxetine which affects serotonin function in the body. Cognitive Treatment Treatment of anorexia is often a long, drawn - out duration, requiring a combination of cognitive and analytic interpretative techniques to explore the past, identifying the underlying cause of the maladaptive behaviour. For older women personal therapy works best whereas family therapy is especially helpful for adolescent patients as every member of the family can understand what the patient is going through (Murray et al., 1997). Anorexia can be fatal if left untreated. About one fifth of people with anorexia recover, a further two fifths gain weight but develop other problems with eating such as bulimia nervosa or binge eating disorder. About one third of sufferers remain anorexic, with only one aim in life - to stay thin. Death rates in long term anorexics are as high as ten percent, usually due to heart failure in the case of bulimic anorexia, suicide or lack of resistance to illness. ...read more.