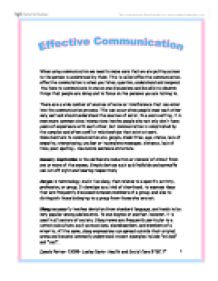 You have to communicate in one on one discussions and be able to observe things that people are doing and to focus on the persons you are talking to.

There are a wide number of sources of noise or interference that can enter into the communication process. This can occur when people know each other very well and should understand the sources of error. In a work setting, it is even more common since interactions involve people who not only don't have years of experience with each other, but communication is complicated by the complex and often conflict relationships that exist at work.

Sensory deprivation is the deliberate reduction or removal of stimuli from one or more of the senses. Simple devices such as blindfolds and earmuffs can cut off sight and hearing respectively

Jargon is terminology, much like slang, that relates to a specific activity, profession, or group. It develops as a kind of shorthand, to express ideas that are frequently discussed between members of a group, and also to distinguish those belonging to a group from those who are not.

Slang necessarily involves deviation from standard language, and tends to be very popular among adolescents. To one degree or another, however, it is used in all sectors of society. Slang terms are frequently particular to a certain subculture, such as musicians, skateboarders, and members of a minority. All the same, slang expressions can spread outside their original arena and become commonly understood; recent examples include "wicked" and "cool".

A dialect is a variety of a language used by people from a particular geographic area.

People who have a sensory impairment have difficult seeing or hearing.

People who are hard of hearing may not understand what they are told. If they can’t hear themselves very well, they can also have difficulty making themselves understood.

Cultural differences sometimes can cause in effective communication for example if an English person was talking to someone from a different language and didn’t really understand the language you can’t talk to them as if they talk the same language as you. You would have to take it a bit slower for them by maybe using a translator, use pictures, signs and gestures and also by repeating what at you say, for it to be effective communication.

A big mistake to make in communication is misunderstanding something and just assuming what they said because you may say the wrong the wrong thing, write down the wrong thing or say one thing but you mean something else that may be important.

Visual and hearing will get in the way off communication for this if you don’t have a lot of patients it will be hard for the both of you. Patients are one of the keys things you have in these situations. You can’t be in a temper and get frustrated because they are not as fast as they were before. You would check that everything they need to see and hear with are with them and good to use, you must describe things in full detail, let them feel things. It is not good shouting at them because they may feel intimidated and you can use gestures and pictures to help them more.