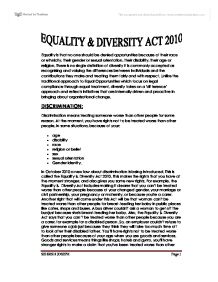 Equality and Diversity. In October 2010 a new law about discrimination is being introduced. This is called the Equality &amp; Diversity Act 2010. This makes the rights that you have at the moment stronger, and also gives you some new rights.

Equality is that no one should be denied opportunities because of their race or ethnicity, their gender or sexual orientation, their disability, their age or religion. There is no single definition of diversity it is commonly accepted as recognising and valuing the differences between individuals and the contributions they make and treating them fairly and with respect. Unlike the traditional approach to Equal Opportunities which focus on legal compliance through equal treatment, diversity takes on a 'difference' approach and reflects initiatives that are internally driven and proactive in bringing about organisational change. DISCRIMINATION: Discrimination means treating someone worse than other people for some reason. At the moment, you have rights not to be treated worse than other people, in some situations, because of your: * age * disability * race * religion or belief * sex * sexual orientation * Gender identity. In October 2010 a new law about discrimination is being introduced. This is called the Equality & Diversity Act 2010. This makes the rights that you have at the moment stronger, and also gives you some new rights. For example, the Equality & Diversity Act includes making it clearer that you can't be treated worse than other people because of your changed gender, your marriage or civil partnership, your pregnancy or maternity, or because you're a carer. Another right that will come under this Act will be that woman can't be treated worse than other people for breast-feeding her baby in public places like cafes, shops and buses. ...read more.

Disabled people can now claim a particular rule or requirement disadvantages people with a certain disability. You can't treat someone unfavorably because of something connected to a disability. The standard example going round here is spelling mistakes because of dyslexia. Under this act an employer can no longer ask a prospective employee about their health before offering them work, unless you can prove you're doing so to check whether the employee can carry out an essential task (such as heavy lifting for a removals company) or to monitor diversity. You can screen health once you've made a job offer - but then of course you're opening a whole new can of worms if you rescind your job offer on the grounds of a disability, as you are then liable to be taken to tribunal too. 'Health' means physical disabilities and mental health problems. This also means you can't ask how much time an employee has taken off work in their previous jobs in an interview. EQUAL PAY & CONTRACT TERMS: The Act introduces a clear an obvious provisions on indirect discrimination in equal pay cases. It also provides the possibility of direct sex discrimination claims in respect of pay based on hypothetical comparators and also limit the enforceability of contractual "pay secrecy" clauses. This act also introduces a power to require large employers to report on their gender pay gap. ...read more.

This act also gives the power of employment tribunal that is if an employment tribunal finds that an employer has discriminated against an employee, the tribunal will be given the power to make recommendations that impact on the wider workforce, such as a recommendation that harassment policies are more effectively implemented. However, the power will not apply in equal pay claims. PUBLIC SECTOR DUTIES: The Act places a new duty on certain public authorities to consider "socio-economic disadvantage" when taking strategic decisions about how to exercise their functions. It replaces the public sector race, gender and disability equality duties with a unified duty covering all strands, based on the current "due regard" principle. Also create a power for the government to issue secondary legislation to require public bodies to report significant inequalities in gender pay, ethnic minority employment and disability employment. The Act places a duty on public bodies, including local authorities, to consider reducing social and economic inequalities when taking strategic decisions. However, that new duty will not apply to decisions concerning individual employees only, although it could impact on local authorities' wider employment strategies. For example, it might require a local authority to consider encouraging applications for jobs from people living in disadvantaged areas of its community where unemployment is high. This is in addition to the public sector equality duties, which under the Act will include the existing ones based on race, disability and sex, but also new ones based on age, religion or belief and sexual orientation. ?? ?? ?? ?? SEHRISH JOSEPH Page 1 ...read more.