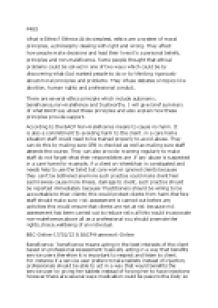 Ethics in health and social care

﻿P4&5 What is Ethnic? Ethnics At its simplest, ethics are a system of moral principles, a philosophy dealing with right and wrong. They affect how people make decisions and lead their lives it?s a personal beliefs, principles and non-maleficence. Some people thought that ethical problems could be solved in one of two ways which could be by discovering what God wanted people to do or by thinking rigorously about moral principles and problems. They infuse debates on topics like abortion, human rights and professional conduct. There are several ethics principle which include autonomy, beneficence,non-malefience and trustworthy. I will give brief summary of what BACP say about these principles and also explain how these principles provide support. According to the BACP Non-maleficence means to cause no harm. It is also a commitment to avoiding harm to the client .in a care home situation staff would need to be trained properly to avoid abuse. They can do this by making sure CRB is checked as well as making sure staff attends the course. They can also provide training regularly to make staff do not forget what their responsibities are .if any abuse is suspected in a care home for example, if a client on ...read more.

For example if client hasn?t received their medication for a while but it says in the record their have received it then the record i not accurate and could cause confusions as well as client could feel they are not taking his/her health serious which could upset client. Trustworthy This is very crucial in health and social setting and when planning support because If the professional is trusted by the client, client would feel comfortable and would be able to speak out about problems more often. http://counselling.co.uk/printable/ethical_framework.html - 17/01/12 Justice: means that everyone must be treated equally also requires being just and fair to all clients and respecting their human rights and dignity no matter what their background which include culture, religion, sex orientation, sexuality, race etc therefore no one should be treated differently because of the background they come from. Professionals should be committed to equality of opportunity, and avoiding discrimination against people. For instance in a health and social care setting if care worker decided not to attend to Mr. khan because he is Asian therefore she doesn?t want nothing to do with him because of his background such practice is race discrimination and shouldn?t not be allowed as it could make Mr. ...read more.

Example 1: Abortion is an ethical dilemma. Some people are pro-abortion while others are strictly against it, it could be because of how they are raised,belief,culture,background etc. for instance if Mr&Mrs hall are a married couple but there are not ready to have children for financial reasons and wants abortion, whereas the doctor is strictly against abortion and refuse to process the situation because of her belief that abortion is like ?taking another person?s life? therefore the situation as become an ethical dilemma. Example 2.: Service user that has been in comma for several years and nothing?s changed, the ethical dilemma would be maybe e to remove service user out of coma as its just taking a lot of money and clients is still in pain, whereas the service user only daughter want to keep her mother because she doesn?t want her to die and wants to be able to see and touch her every day. This would lead to an ethical dilemma between doctors, the care company as well as the daughter. Justify how an ethical approach to providing support would benefits individuals: ...read more.