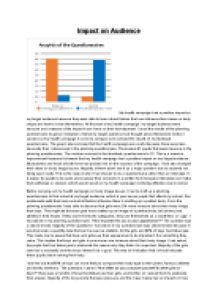 The critical question I had asked in my feedback questionnaire was; ?Did you learn anything from the campaign?? This was a closed and opened question because I had given the option of ticking yes or no and a space for those that ticked yes to state what they had learned from my health campaign. I am proud to say that all the pupils had ticked yes and majority of them wrote that they had learned to value their body shape and size. Some wrote detailed answered on specific activities and the impact it had on them. For example a student wrote that they had found the Building Self-Esteem workshop helpful because they had been successful in interacting with other pupils and had become more confidence. I was really pleased with the results of this question because it shows that my health campaign. Overall, the questionnaires were helpful in creating my campaign and the impact it had. The planning questionnaire had helped me to get a generalised idea of why and how my target audience are insecure about their body shape and size. The planning questionnaire had also helped me design activities and workshop. I came up with the Mass Media workshop when the pupils had written that they were highly influenced by what they saw on the mass media, which consist of newspapers, magazines, televisions, mobile phones, internet and etc. I wanted to show the pupils that it is perfectly alright to be insecure because it is in human nature to be worried about how we look. This sparked the idea of using celebrities, who are the people that most young children look up to. If a celebrity, like Taylor Swift or Adele is insecure then it is perfectly fine to accept help from professionals, like the celebrities have done. The feedback questionnaire was useful in giving me an indication how useful my health campaign about body image issues. ...read more.

Children naturally come in different sizes and builds and that is fine. I feel that I have met my aims and objectives because the pupils in year seven have cooperated well in the workshop and had told me personally that the campaign was very useful. My aim was to educate young females and males that have just started secondary education into valuing their body. This was because girls and boys in year seven tend to be more insecure about their body compared to other year groups in secondary education. This may be due to puberty or a new environment. Primary schools had a smaller classroom size than high schools. This can make girls and boys that were already cautious about their body changing, more insecure because of a larger peer group subculture. Early or late bloomers may feel like they are developing differently to their peer groups. My objective was to tackle low self-esteem in preteens in the first year of secondary education by organising a focus group in the school I attend. I had put the focus group for pupils in year seven only. I had found out if I had accomplished my aim and objective from the feedback questionnaire. The students had given the workshops a high average score (I?ve mentioned this on the impact of audience) and had found the campaign to be useful. If I was doing this task again I would like to expand the campaign for pupils in year 8 and so on. This is because low self-esteem and body image issues can occur in other year groups. I would very much like to educate the other years. Unfortunately, my main focus on the campaign was on year seven because that is the starting point for most children. There are some pupils that have not been taught why it is important to value your body. I might use a different approach because they would be older than my target audience. This might be done by adding another workshop about self-harming and the affect it has a person?s health. That might be interesting for pupils. ...read more.