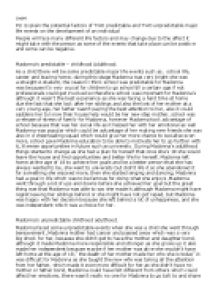 ﻿Unit4 P3: Explain the potential factors of TWO predictable and TWO unpredictable major life events on the development of an individual People will face many different life factors and may change due to the affect it might take with the person as some of the events that take place can be positive and some can be negative. Madonna?s predictable ? childhood Adulthood. As a child there will be some predictable major life events such as, school life, career and leaving home, during this stage Madonna was very bright she was a straight A student, the reason I think school was predictable for Madonna was because it?s very crucial for children to go school till a certain age if not professionals could get involved so therefore school was important for Madonna?s although it wasn?t the best experience as she was facing a hard time at home due the fact that she look after her siblings and also the lost of her ...read more.

she has always wanted to be, she went to university but didn?t life it so she abandoned it for something she enjoyed more, then she started singing and dancing, Madonna had a goal in life which was to be famous for doing what she enjoys ,Madonna went through a lot of ups and downs before she achieved her goal but the great thing was that Madonna was able to say she made it.although Madonna might have regret leaving her siblings behind or she might have not got raped, but Madonna was happy with her decision because she left behind a lot of unhappiness, and she was independent which was a choice for her. Madonna?s unpredictable childhood adulthood. Madonna faced some unpredictable events when she was a child she went through bereavement ,Madonna mother had cancer and passed away which was a very big shock for her, because she didn?t get to have the mother and daughter bond, although it made Madonna ...read more.

was where she started to achieve her goal gradually as Madonna was known as a great dance diva throughout the clubs in New York, Madonna then started a band known as the Breakfast Club but it didn't work out so she went solo and made it that way. Madonna based her music that women can relate to it.before all this Madonna faced a lot first she was assaulted by two men in new York, it affected her emotional as she was scared of men after that .however Madonna had a lot of divorce and boyfriends as she gets older and famous this could have been because her mother wasn?t there to talk about things like this with her. Madonna now adopt children in Africa this wasn?t in her plan but she has been inspired and influcened to do so alongside with her singing career. Overall Madonna went through difficulties and did have an effect on the person she has become today. ...read more.

Star rating of 3
This assignment has been written for unit 4 of the BTEC Health and Social Care course. It aims to achieve P3