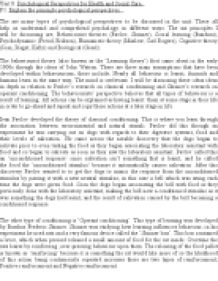 ﻿Unit 8: Psychological Perspectives for Health and Social Care. P1: Explain the principle psychological perspectives. The are many types of psychological perspectives to be discussed in the unit. These all help us understand and comprehend psychology in different ways. The six principles I will be discussing are; Behaviourist theories (Pavlov, Skinner), Social learning (Bandura), Psychodynamic (Freud, Erikson), Humanistic theory (Maslow, Carl Rogers), Cognitive theory (Jean, Piaget, Kelly) and Biological (Gesel). The behaviourist theory (also known as the ?Learning theory?) first came about in the early 1900s through the ideas of John Watson. There are three main assumptions that have been developed within behaviourism, these include; Nearly all behaviour is learnt, Animals and humans learn in the same way, The mind is irrelevant. I will be discussing these ideas ideas in depth in relation to Pavlov?s research on classical conditioning and Skinner?s research on operant conditioning. The behaviourists? perspective believes that all types of behaviour is a result of learning. All actions can be explained as having learnt them at some stage in their life in order to go ahead and repeat and copy these actions at a later stage in life. Ivan Pavlov developed the theory of classical conditioning. This is where you learn through the association between environmental and natural stimuli. Pavlov did this through an experiment he was carrying out on dogs with regards to their digestive systems, food and their levels of salivation.. He came across the notable discovery that the dogs began to salivate prior to even tasting the food as they began associating the laboratory assistant with food and so began to salivate as soon as they saw the laboratory assistant. Pavlov called this an ?unconditioned response? since salivation isn?t something that is learnt, and he called the food the ?unconditioned stimulus? because it automatically causes salivation. After this discovery Pavlov wanted to to get the dogs to mimic the response from the unconditioned stimulus by pairing it with a new neutral stimulus, in this case a bell which was wung each time the dogs were given food. ...read more.

The process of imitating this behaviour is called modelling where we base our behaviour upon the individual we admire. It is seen however that individuals are more likely to copy behaviour if the role model has been positively reinforced for it, which would make us want to copy to get the same result. We are less likely to copy behaviour that has effects of negative reinforcement because we would want to avoid the punishment that was given for behaviour. The third type of psychological perspective is the psychodynamic approach. This approach was developed by the Austrian psychologist Sigmund Freud. Freud looked into and developed the theory of psychodynamic psychology and the treatment psychoanalysis. Freud made various assumptions that are now included in the psychodynamic approach including that our behavior and feelings are powerfully affected by unconscious motives. Our behavior and feelings as adults (including psychological problems) are rooted within our childhood experiences. All behavior has a cause (usually unconscious), even slips of the tongue. Therefore all behavior is determined. Personality is made up of three parts, which is the id, ego and the super-ego. Behavior is motivated by two instinctual drives; Eros (the sex drive & life instinct) and Thanatos (the aggressive drive & death instinct). Both these drives come from the ?id? part of the personality. Parts of the unconscious mind (the id and superego) are in constant conflict with the conscious part of the mind (the ego). Personality is shaped as the drives are modified by different conflicts at different times in childhood (during psychosexual development). Freud was one of the first to suggest that we are not always aware of ourselves and that there is always much more deep inside our minds that we cannot access but sometimes can appear through our dreams and slips of the tongue, these are stored in a part of our mind called the ?unconscious?. The tip of the iceberg was Freud?s way of explaining how the unconscious mind works, saying that only small parts of ...read more.

Biology and genetic inheritances determine predictable patterns of biological behavior that Gesell termed norms. He felt that children's development patterns opened automatically by biology, as the unfolding of a flower does because it is genetically programmed to do so in the right environment. As the flower requires proper soil and rain, children require a nurturing, stable environment, and little else to mature both biologically and psychologically. Gesell was among the first professionals to compile developmental stage information with which parents could learn to understand their children. Because childhood and adolescent development is the product of millions of years of evolution, he mainly advocated sensitivity and understanding as parental approaches to development. Biology has already given children what they need to understand their own development.Gesell worked in a lab at Yale University, studying children and their developmental stages. He cataloged children's behavior at various ages and described the norms in their collective development. As such, his theory is often grouped with normative-descriptive approaches, because it uses norms of development to describe the process of maturation.Gesell's theory was groundbreaking because it implied that learning, illness, injury and life experiences were secondary, if at all influential, to biology and the evolution of the genetics that program a child's development. Unless the child's environment were so distorted as to be harmful, he felt that children were born with all the information their bodies needed for development and maturation. Genetics determine the developmental process and the timing of maturation, and parents could affect very little of this, except by being sensitive to cues learned from the descriptive norms. Our genes play a big part on our behaviour. There are many disorders that affect our behaviour that are caused by genes such as Huntington?s disease which is caused by a single dominant gene in our DNA which can be passed down to the child from either parent. Other diseases such as cystic fibrosis and sickle cell anaemia are passed down to the child when both parents are carriers on the gene. Disorders that are affected by our genes have no effects or influences from the environment. ...read more.