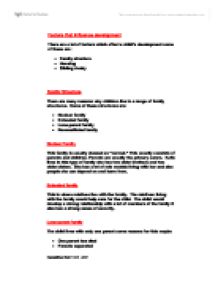 Factors that influence development There are a lot of factors which effect a child's development some of these are: * Family structure * Housing * Sibling rivalry Family Structure There are many reasons why children live in a range of family structures. Some of these structures are: * Nuclear family * Extended family * Lone-parent family * Reconstituted family Nuclear Family This family is usually classed as "normal." This usually consists of parents and children. Parents are usually the primary carers. Katie lives in this type of family she has two older brothers and two older sisters. She has a lot of role models living with her and also people she can depend on and learn from. Extended family This is where relatives live with the family. The relatives living with the family would help care for the child. The child would develop a strong relationship with a lot of members of the family it also has a strong sense of security. Lone-parent family The child lives with only one parent some reasons for this maybe * One parent has died * Parents separated * Single parent by choice * Teenage pregnancy The effect this will have on the child is that the child may not get enough attention because the parent might be working or for some other reason. Reconstituted family This happens when either a widowed or divorced parent remarries thus adding step brothers and sisters into the equation. ...read more.

As a child is growing up even from when they are baby girls wear pink and boys wear blue this is not really a social factor but it shows a difference even from a very young age. When a child is young they don't care wiether a person is male or female, but as time progresses and they get older the begin to socialise with their own sex rather than the other. Girls also tend to "grow up" more than boys from a young age they c their mother or older sisters putting on make up or using their phones and want to mimic them. Where as boys usually play football etc. Katie does mimic her mother and sisters but she also likes to play with tractors and cars which is seen as more of a boys activity. Social class This is also an important factor as it can limit or increase the amount of opportunities for development. If a child is raised in a middle class will have more opportunities than a child in a working class family as money is the main factor. Such a small thing can have such a large impact on a child's development. Middle class can also afford better food, toys and education. They may also have a better manner of talking which will help them in later life. Where as a person a person from a Woking class family maybe hindered by this. ...read more.

Sometimes these fears are long-term and stay with them even through adulthood. Fears are also a result of the child's imagination developing which may get carried away. Environmental factors This has to do with the area surrounding where the child lives. Things which affect the child is Housing Housing If there is lack of space you are unable to have personal space which increases tension or if the house is damp or dirty this will affect a child's health it can lead to respiratory problems. Depending on where a child lives can affect the facilities available to it. If a child lives in the country there will be ample space out doors for playing although there maybe very little people around for company. Living in the country can both help and hinder a child's development because if there are no facilities or people to communicate their social development and intellectual development will suffer as a result. There would also be very little facilities. If a child lived in a city or town there would be a lot of facilities like a libraries and parks, there would also be allot of people around for the child to play with. This would help the child's intellectual development. As they will get a lot of influence to talk. They may also be more vulnerable to peer pressure. Katie lives in the countryside in a well heated and facilitated house with plenty of outside space. Also as both Katie's parents drive, so mobility to and from different places is not a problem. ?? ?? ?? ?? Geraldine Bell 13 H AO1 ...read more.

This report demonstrates a very basic level of knowledge and understanding of how certain factors can affect development. it is not clear in the first instance of who the report is based around or the intentions of the report. a strength of this report is that it is easy to read as the writer has set it out in a simple manner.