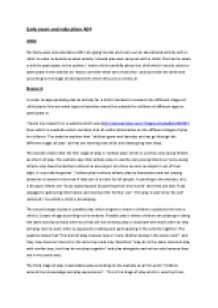 For Early years and education A04 I am going to plan and carry out an educational activity with a child.

﻿Early years and education A04 A04A For Early years and education A04 I am going to plan and carry out an educational activity with a child. In order to decide on what activity I should plan and carry out with a child I first had to select a child to participate in the activity. I had to think carefully about the child which I would select to participate in the activity as I had to consider what sort of activity I could provide the child with according to the stage of development which they are currently at. Research In order to appropriately plan an activity for a child I decided to research the different stages of child play to find out what types of activities would be suitable for children of different ages to participate in. I found my research on a website which was http://ezinearticles.com/?stages-of-play&id=900253 from which is a website which contains a lot of useful information on the different stages of play for children. The website explains that ?children grow and develop as they go through the different stages of play? as they are learning new skills and developing new ideas. The website states that the first stage of play is ?solitary play? which is used by very young infants as a form of play. The website says that solitary play is used by very young infants as ?very young infants only have the ability to attend to one object at a time as once an object it out of their sight, it is quickly forgotten?. Solitary play is where infants play by themselves and not paying attention to anyone else even if they are in a room full of people. According to the website, this is because infants are ?busy exploring and discovering their new world? and they are also ?fully engaged in gathering information and storing it for further use?. ...read more.

Knowing that there was some confusion in the activity has allowed me to know how to ensure that there would be no confusion if I were to repeat the activity again as I am now aware that the activity needs more time to be completed in which would allow Francesca to be able to gain more out of doing the activity if she had more time to make less mistakes. The fact that some mistakes were made, suggests that the timing which was allowed for the activity had a negative impact on Francesca?s intellectual development as she did not gain the full benefit from doing the activity. Moreover, I asked myself whether or not I thought that all of the aims I pre-set for the activity were achieved. I answered this question saying that I felt that ?all of my aims had been achieved?. To explain this answer I further explained that ?I felt that my first aim had been met as I felt that Francesca had learnt something from the activity as she had experienced learning new cooking skills, which from speaking to her- she has never had much practice in experimenting in the kitchen before so this was evidently a new learning opportunity for her which she learnt basic cooking skills from?. The fact that she was able to learn a new skill enabled Francesca to develop physically as she was learning new physical skills which contributed positively to her physical development. I also explained that I felt that my second aim had been met as ?I did find out what type of learner Francesca is?. I discovered that she is a ?visual learner by observing the way she approached tasks? which means that I managed to achieve my second aim. Finally, I also answered saying I felt that I had achieved my third and final aim as ?I think that I have helped to develop some aspects of Francesca?s physical, intellectual, emotional and social development. ...read more.

To further enhance my praise, I would provide rewards for the child such as rewarding them with sweets, stickers or certificates as I would break the activity down into stages and after completing each stage I would reward the child with a prize. For example, I would make the recipe card more challenging to read by getting the child to match the instructions with pictures, and once they had completed this successfully they would be rewarded. This would encourage and motivate the child to want to complete the activity to the best of their ability. In conclusion, the final and main improvement would be that I would consider doing the activity with more than one child if I were to repeat the activity again. I would want to complete the activity with a group of about 4 or 5 children of the same age as I feel that if they are of the same age then they are at relatively similar stages of physical, intellectual, emotional and social development so they would all also be able to have a similar understanding of the activity. I believe that allowing the child to work in a group with a few other children would allow them to be able to grasp a better understanding of the activity as they can help each other if a couple of the children understand what they have to do then they can help to instruct the other children on what to do. Children also tend to copy and imitate each other a lot as a form of learning, for example; if a child see?s another child playing with a toy in a certain way then that child would be likely to copy and imitate what the other child is doing as they are learning from watching others. This would promote good teamwork and communication skills amongst the group of children and would also improve the children?s cooperative play skills and social skills which would have a positive impact on the children?s social development. ...read more.