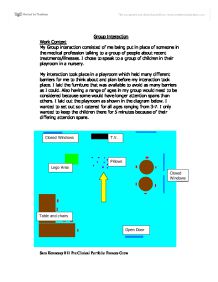 Group Interaction Work Context My Group interaction consisted of me being put in place of someone in the medical profession talking to a group of people about recent treatments/illnesses. I chose to speak to a group of children in their playroom in a nursery. My interaction took place in a playroom which held many different barriers for me to think about and plan before my interaction took place. I laid the furniture that was available to avoid as many barriers as I could. Also having a range of ages in my group would need to be considered because some would have longer attention spans than others. I laid out the playroom as shown in the diagram below. I wanted to set out so I catered for all ages ranging from 3-7. I only wanted to keep the children there for 5 minutes because of their differing attention spans. As my diagram indicates I set out the playroom very carefully. I laid it out in this way for many of the same reasons as for my one to one. Refer back to my one to one for those reasons. In addition I asked the children where they would like to sit, at the table or on the pillows. ...read more.

I didn't use Tuckman's example of group interactions which is; Forming - Group asks questions about aims and roles. Leader emerges Storming- Conflict occurs as members argue over purpose. Norming- Group identity develops with a strong set of shared values and norms. Group becomes cohesive Performing- Group gets down to the task, goal is more important than the leader. I didn't use any of these in my group interaction because of the age range of my clients. They were two young to argue over purposes and most of them would have been bored by the time I had finished forming and I would have lost them. I would expect Bales 'different types of communication behaviour expressed by members of a group.' To appear in my interaction, in particular: Proposing- offering new ideas e.g. Supporting- communications that support/agree with the comments of others. Blocking- some of the children employed this when I asked them their opinion of their doctor. But through a series of open questions I will try to negate this behaviour. Information seeking- I used this a lot when trying to extract information about why they had to go to the doctor's. Information giving- most of the group gave me information when I asked them. ...read more.

A good discussion of an observation carried out with young children. The writer has made some good observations and links the care value base and theory well.