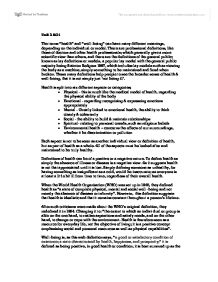 Unit 3 AO1 The terms "health" and "well-being" can have many different meanings, depending on the individual or model. There are professional definitions, like those of doctors and other health professionals; which generally give a more scientific view than others, and there are the definitions of the general public; known as lay definitions or models, a popular lay model with the general public majority being Stainton Rodgers 1997, which includes lay models such as viewing the body as a machine, simply something to be maintained and fixed when broken. These many definitions help people to see the broader sense of health & well-being, that it is not simply just 'not being ill'. Health is split into six different aspects or categories; * Physical - this is much like the medical model of health, regarding the physical ability of the body * Emotional - regarding recognising & expressing emotions appropriately * Mental - Greatly linked to emotional health, the ability to think clearly & coherently * Social - the ability to build & maintain relationships * Spiritual- relating to personal creeds, such as religious beliefs * Environmental health - concerns the effects of our surroundings, whether it be discrimination or pollution Each aspect is not to be seen as another individual view or definition of health, but as part of health as a whole. All of the aspects must be looked after and maintained to be truly healthy. ...read more.

Smoking can affect health in several ways: * Most commonly it can greatly increase your chances of getting diseases such as lung cancer, increasing the risk from 1,1% to 22.1% for a males and from 0.8% to 11.9% for a females before the age 85, or heart disease increasing the risk * The use of smoking as a recreational activity could have positive effects in decreasing stress levels, on the other hand when depleted of nicotine stress increases until the next 'fix' of nicotine * In contrast, it could create stress and/or anxiety financially as fuelling a nicotine addiction, as the NHS states that based on smoking five cigarettes a day would cost you �40 in one month, �237 after six months and so on. * Socially, smoking may be of benefit. As it is often seen as a social activity, even simply offering a cigarette in a social setting such as a bar can be a excuse to talk to strangers, allowing the potential for forming more relationships with people. This is enhanced by the prohibition of smoking in public buildings, as this forces smokers to either gather in a specified room or outside area. Ref: handout from Applied AS Health & Social Care, Fisher et al, Folens, UK, 2006, www.wikipedia.com, http://www.nhs.uk/Tools/Documents/Smoking%20calculator.html The Biomedical/Medical Model It is the main model referred to by health professionals, it is the view represented by traditional medicine, which it is central to, and the traditional scientific views of health and illness. ...read more.

Different symptoms of ill-health can affect your quality of life in many ways. Disturbed sleep patterns may affect a person: * Physically - being too tired to do anything may make their physical health decrease due to a lack of exercise * Emotionally - without proper sleep they will not feel at their best, and may be prone to bad moods * Socially - a lack in sleep may mean they don't want to g out or communicate more than what would be necessary, possibly even snapping at friends and causing small fall outs * Financially - Their work performance may decrease, leading to a Sabbatical or being fired from work, obviously leading to an income decrease and severe stress and/or depression. A persistent, severe headache could affect someone in the following ways: * Physically - the pain of the headache may make them unable to walk or carry out everyday activities properly, especially if it affects their eyesight * Emotionally - they may become depressed over time due to their decreased ability to do what they want, when they want to * Socially - it may render them housebound, resulting in a lack of social activity, only emphasized if their headache is too severe to withstand talking on a phone for any period of time * Financially - they will have to take time off work, not being paid they will eventually be unable to pay bills, mortgages etc. and may even end up fired from their job altogether ?? ?? ?? ?? ...read more.