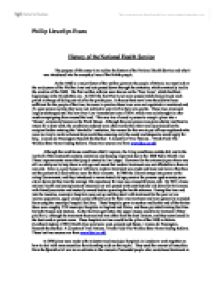 History of the National Health Service.

Phillip Llewellyn-Evans History of the National Health Service The purpose of this essay is to outline the history of the National Health Service and why it was introduced into the everyday lives of the British people. As the NHS is a major factor of the welfare given to the people of Britain, we must look at the early years of the Welfare laws and acts passed down through the centuries, which eventually lead to the creation of the NHS. The first welfare reforms were known as the 'Poor Laws', which had their beginnings in the Elizabethan era. In 1601 the first Poor Laws were passed which basically put each parish in charge of doling out relief to the parish poor. In theory these new laws should have been sufficient for the people of the time, however in practice these laws were not regulated or monitored and if a poor person moved, they were not entitled to any relief in their new parish. These laws remained largely unchanged until the new Poor Law Amendment acts of 1834, which was only brought in after much campaigning from around the land. This new law allowed a person to accept a place into a 'House', commonly known as the Work House. Although the poor person was given shelter and food in return for a days work, the conditions endured were often worse than what was experienced by the recipient before ...read more.

and finally, family practitioner services which consisted of the family doctor (GP), dentist, chemist (for prescription drugs), and opticians (this was known as the tripartite system). When the NHS started nobody could predict how much all these services would cost to run, Britain was still reeling from the effects of the war, with much of the country still on food rationing when the NHS started and within three years of starting, the Government was forced to start charging people minimal fees for some basic services. These included having to pay for prescription charges, and having to pay a flat rate of one pound for any dental treatment needed, another reason for the charges was to try and prevent abuse of the system by the people who up until now had always had to pay for such treatment. Even then as it is today, it was a hard juggling act to keep the balance of cost on the NHS. Bevan foresaw this and said "We shall never have all we need. Expectations will always exceed capacity. The service must always be changing, growing and improving - it must always appear to be inadequate." (Welcome to the NHS (08/04/03) www.nhs.co.uk) Although the NHS was a resounding success, the Tories when they got into power in the 1950s were still not happy with what they thought was a socialist policy. ...read more.

www.nhs.co.uk . The NHS explained (08/04/03) www.nhs.co.uk) The conclusion of this, is that the present Labour Government like its predecessors has poured millions into the NHS and still the waiting lists get longer and the quality of the service worsens, and like so many before them they could lose the respect of the voters over the nations jewel in the crown. The NHS really needs to be reorganised to meet the demands of the modern world, and a restructured chain of command to cope with a new system, one of these ideas which labour have proposed is the introduction of foundation hospitals. The idea of foundation hospitals disgusts some people, who believe that the NHS is a system for everyone regardless of class, gender or colour, but for those who can afford it private healthcare supplied by the NHS could be the way forward, and would give the NHS more money to spend on the average man to get the free healthcare that Bevan wanted for the classes, although some people argue that it could create a two tier health system in the NHS. One thing is certain, if the NHS is to survive, then it has to change to meet with the ever changing needs of our society, but also society has to be taught that the NHS is there as a need and not as a want and that it should never be abused. ...read more.

Star rating 3
This essay discusses the history of the NHS up to 2004. It has used a number of resources including some websites which are no longer available. It can be improved by referencing in the Harvard style, which would then ensure that there is no plagiarism present. It can also now be extended to cover the last decade.