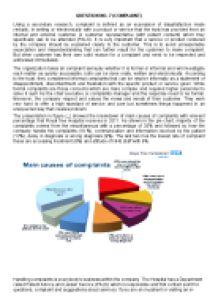 How a hospital handles patient complaints.

﻿QUESTION NO. 7 (COMPLAINT) Using a secondary research, complaint is defined as an expression of dissatisfaction made verbally, in writing or electronically with a product or service that the trust has provided from an internal and external customer or customer representative (with patient consent) which they specifically ask to be attended (PALS). It is very important that a service or product rendered by the company should be explained clearly to the customer. This is to avoid unreasonable expectation and misunderstanding that can further result for the customer to make complaint. But other customer has their own valid reason for a complaint and need to be respected and addressed immediately. The organization takes all complaint seriously whether it is formal or informal and will investigate each matter as quickly as possible, both can be done orally, written and electronically. ...read more.

As shown in the pie chart, majority of the complaints comes from the miscellaneous with a percentage of 35% and followed by how the company handle the complaints (19 %), communication and information received by the patient (12%), delay in diagnosis or wrong diagnosis (9%). The last two has the lowest rate of complaint these are accessing treatment (8%) and attitude of NHS staff with 6%. Handling complaints is everybody?s business within the company. The Hospital has a Department called Patient Advice and Liaison Service (PALS) which is responsible and first contact point for questions, complaint and suggestions about services. If you are an in-patient or visiting an in-patient, the best person to talk to is the matron of the ward. ...read more.

The third step is the PALS will again pass the written complaint to the Complaint Department if the action they made did not solve the issue. The complaint will be acknowledged within three working days, explanation of the process will be delivered and consent from the complainant for the investigation will be taken. The last step of the first stage is the company will investigate for the second time and respond within twenty five working days. The second stage of the Handling Complaint is the PALS will refer the issue to the ombudsman if and only if the complainant is still not satisfied with the response or action taken by the company. This Occasion only arrives when in the complaint the life of the customer was put to danger. REF: http://www.qfinance.com/dictionary/customer-complaint QFINANCE June 26, 2012 http://www.royalfree.nhs.uk Royal free london 08 May 2012 ...read more.