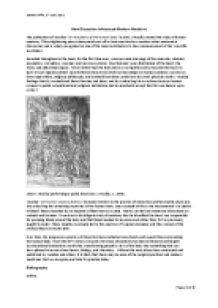 ﻿Daniel Griffin, 1st April, 2012 How Dissection Influenced Modern Medicine The publication of Vesalius? ?On the fabric of the human body? in 1543, virtually created the study of human anatomy. This enlightening piece subsequently set off a chain reaction for countless other anatomical discoveries and is widely recognised as one of the main contributors to the commencement of the ?scientific revolution?. Revealed throughout in the book, for the first time ever, were accurate drawings of the muscular, skeletal, respiratory, circulatory, vascular, and nervous systems. Also featured were illustrations of the heart, the brain, and abdominal organs. Never before had the body been so comprehensively documented layer by layer in such rigorous detail. ...read more.

One example of this is the monumental ?circulation of blood? theory founded by an inspired William Harvey in 1628. Harvey carried out numerous dissections on animals and humans. It was due to his diligent study of anatomy that he identified the heart was responsible for pumping blood around the body and that blood needed to be preserved rather than ?let? as previously taught by Galen. These insights eventually led to the practice of ?surgical clamping? and the concept of the artificial heart centuries later. Over time, the progressive practice of dissection has eradicated uncertainty and superstition surrounding the human body. From the 18th century onwards, the study of anatomy has been embraced and taught by educational institutions worldwide, transforming people?s view of the body into something that can be explained in terms of mechanics, biology, and chemistry. ...read more.