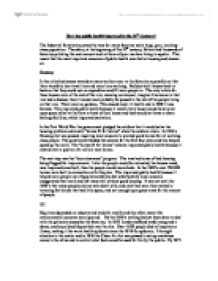 How has public health improved in the 20th Century?

How has public health improved in the 20th Century? The Industrial Revolution paved the way for many factories and a large, poor, working-class population. Therefore, at the beginning of the 20th century, Britain had thousands of factories polluting the environment and millions of poor workers living in squalor. This meant that the most important concerns of public health were better housing and cleaner air. Housing In the cities businesses wanted as many workers near to the factories as possible so that there would be less travel time and more time working. Builders built houses back to back so that they could cut on expenditure and fit more people in. ...read more.

The government funded the scheme for the first four years and this helped speed up the work. The "homes fit for heroes" scheme improved public health because it created over a quarter of a million new homes. The next step was the "slum clearance" program. This involved areas of bad housing being flagged for improvement. Later the people would be relocated, the houses razed, new improved ones built, then the people would move back. In the 1930's over 700,000 homes were built in connection with this plan. This improved public health because it helped more people out of squalid conditions but unfortunately local councils exaggerated their work and left many still without good housing. ...read more.

By 1971 the smoke pollution entering the atmosphere had been reduced by 65%. This helped improve public health because it greatly reduced long-term affects on people's respiratory organs. This was not all. After the Second World War the National Health Service was created and by 1948 nearly all the hospitals had joined the organization and 92% of doctors had. This improved people's chances because it opened up a new angle on health, it was something for all, anyone could seek advice and get treatment. Unfortunately the demand was so high that the NHS could not cope. By 1960 spending was �726 million. Public Health was also improved through INTERNATIONAL CO-OPERATION and COMMUNICATION. The World Health Organization, set up by the United Nations, increased the number of children receiving vaccinations, eradicated smallpox and is working to eradicate polio, malaria and tuberculosis. ...read more.

Star rating 3
This essay describes and partially explains three factors that explain how public health improved in the twentieth century. Housing and air pollution, associated with factories, have been considered, and health introduced through the beginnings of the NHS and vaccination. Improvements can be made as is indicated in the feedback provided. There is no referencing nor a bibliography produced.