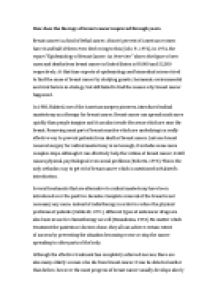 How has the therapy of breast cancer improved over the years

﻿How does the therapy of breast cancer improved through years. Breast cancer is a kind of lethal cancer. About 6 percent of American women have it and half of them even died owing to this (Cole, P., 1974). In 1974, the report ?Epidemiology of Breast Cancer: An Overview? shows the figure of new cases and deaths from breast cancer in United States is 89,000 and 32,500 respectively. At that time experts of epidemiology and biomedical science tried to find the cause of breast cancer by studying genetic, hormonal, environmental and viral factors in etiology, but still failed to find the reason why breast cancer happened. In 1980, Halsted, one of the American surgery pioneers, introduced radical mastectomy as a therapy for breast cancer. Breast cancer can spread much more quickly than people imagine and it can also invade the areas which are near the breast. ...read more.

Although the effective treatment has completely achieved success, there are also many elderly women who die from breast cancer. It can be detected earlier than before, however the most progress of breast cancer usually develops slowly and the numbers of patients had already suffered from other causes before their cancer being symptomatic. It has been calculated that the average cost for breast cancer treatment may rise approximately about $20,000 after the patient survives breast cancer. These figures are from Medicare and National Cancer Institute?s Surveillance on the innovations in treatment from 1985 to 1996. As this essay mentioned, treatments often have side effects especially the treatments for cancers. Feeling tired, have no appetite, losing weight, wanting to throw up and damaged skin, these are all common side effects which may happen during the process of breast cancer treatment. While reducing the dose or changing the prescription has fewer side effects majority of women would like to let their body heal itself. ...read more.

Plastic surgery is now a mature medical technique that can reconstruct the human body, but it still has to reduce the potential psychological problems. The intimate relationship between couples may also be difficult after surviving breast cancer. So the problem comes after the journey of survival is not an individual problem anymore, it may not do harm to both partners? physical health but how about their mental health? Lack of sex is a kind of problems that comes from mental problem due to the partner?s mastectomy surgery. To conclude, this essay has discussed how the therapy of breast cancer has improved through years. An increasing number of women avoid death as a result of breast cancer. It has emerged that mastectomy; the most effective way to heal breast cancer that can save victims from death may also cause some troubling side effects to both patient and partner. It is to be hoped that while the innovation of medical technology continues, medical experts can focus more on the side effects of every new therapy, in order to prevent patients suffering harmful side effects. ...read more.