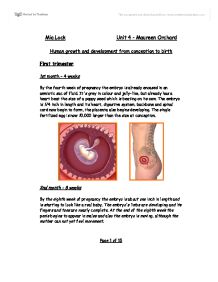 Human growth and development from conception to birth

Mia Lock Unit 4 - Maureen Orchard Human growth and development from conception to birth First trimester 1st month - 4 weeks By the fourth week of pregnancy the embryo is already encased in an amniotic sac of fluid. It's grey in colour and jelly-like, but already has a heart beat the size of a poppy seed which is beating on its own. The embryo is 1/4 inch in length and its heart, digestive system, backbone and spinal cord now begin to form, the placenta also begins developing. The single fertilized egg is now 10,000 larger than the size at conception. 2nd month - 8 weeks By the eighth week of pregnancy the embryo is about one inch in length and is starting to look like a real baby. The embryo's limbs are developing and its fingers and toes are nearly complete. At the end of the eighth week the penis begins to appear in males and also the embryo is moving, although the mother can not yet feel movement. Page 1 of 15 3rd month - 12 weeks A 12 week fetus measures around 8cm (3in) and weighs about a 1/2 to one oz.All its major body organs and tissues have formed and he or she is already making jaw movements, sucking and swallowing. A fetal heart rate can be heard at 10 weeks with a special Doppler instrument. ...read more.

Bodily actions which are concerned with survival - breathing, eating and excreting give rise to a wide range of vegetative noises, such as sucking, swallowing, coughing and burping. It is often difficult to determine the nature of baby's cries during this period. Reception: The baby will turn its head to regard a nearby speaker and react appropriately to meaningful sounds for example, when its meal is being prepared. Just as very young infants show a preference for human faces, so they are able to distinguish and show a preference for listening to human speech. 8 - 20 weeks - Cooing and laughing Expression: Cooing sounds develop alongside crying, but are produced when the baby is in a settled state. These cooing sounds are quieter, lower pitched and more musical than crying; they usually consist of a short, vowel-like sound preceded by a consonant-like sound made toward the back of the mouth. Later in this period, cooing sounds are strung together - often 10 or more at a time. Some of these sequences, such as "ga" and "gu" begin to resemble the syllables of later speech. At around four months, the first throaty chuckles and laughs come out. Reception: The baby can now localise sounds and pays interested attention to nearby meaningful sounds, particularly familiar voices. 20 - 30 weeks - Vocal play Page 10 of 15 Expression: There is a lot of variation in the sounds produced during vocal play. ...read more.

Infancy (0 - 2 years) Gross motor skills and newborn reflexes Several reflexes are observed at birth or shortly afterwards * A newborn baby will automatically suck objects placed in its mouth * A baby's hands grip tightly onto objects placed in them * If the sole of a baby's foot is stroked, its toes will curl * The baby will show a startle reflex in response to loud noises. The arms and legs are pulled up, with the elbows flexed and the hands closed * The baby will also show the moro reflex, which differs from the startle reflex in that the elbow is extended and the hands open Page 14 of 15 Age Gross and fine motor skills Newborn * Innate reflexes: sucking, stepping, gripping * Plantar reflexes * Startle reflexes 2 months * Can lift head when lying face down 3 months * Holds rattle placed in hands * Turns head to sound 4 months * Puts hands together 5 months * Can reach for, and grasp an object 6 months * Sits (hands used for support) * Rolls over * Transfers object from one hand to the other 7 months * Sits without using hands for support 8 months * Leans forward to reach for objects when sitting 9 months * Pulls up to standing position * Crawls * "Inspects" objects with index finger 10 months * Offers object to carer, but will not release it. ...read more.