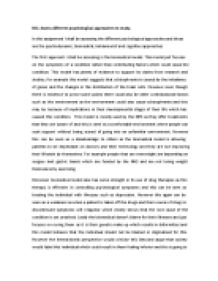 I shall be assessing the different psychological approaches and these are the psychodynamic, biomedical, behaviourist and cognitive approaches.

﻿M1: Assess different psychological approaches to study. In this assignment I shall be assessing the different psychological approaches and these are the psychodynamic, biomedical, behaviourist and cognitive approaches. The first approach I shall be assessing is the biomedical model. This model just focuses on the symptoms of a condition rather than contributing factors which could cause the condition. This model has plenty of evidence to support its claims from research and studies, for example this model suggests that schizophrenia is caused by the imbalance of genes and the changes in the distribution of the brain cells. However even though there is evidence to prove some points there could also be other contributional factors such as the environment as the environment could also cause schizophrenia and this may be because of implications in their developmental stages of their life which has caused this condition. This model is mostly used by the NHS as they offer treatments that they are aware of and this is seen as a comfortable environment where people can seek support without being scared of going into an unfamiliar environment. ...read more.

The behaviourist approach uses animals to prove scientific theories of the strengths of this approach is that there is scientific studies carried out to test the behavioural model and all of these have agreed with the theory. This was done by using a child called little Albert to test phobias and fears and Watson used rats to test this. This can be seen as a disadvantage, this is because humans and animals do not behave in the same way and humans are a lot more complex than animals. The behavioural model can also be seen as an advantage and this is because this model explains the psychological problems that the individual may be facing and rejects the labels that biomedical model gives to individuals e.g. ?ill? and ?abnormal?. Also this model takes a practical problem solving approach by changing maladaptive behaviour to be more adaptive by taking into consideration individual differences and viewing each individual as different as everyone?s situation and condition is different. ...read more.

This is seen as a weakness because it is seen as unfair to parents as they are not always to blame. Also the psychodynamic model claims that they shouldn?t worry about hurting people?s feelings and they should focus on the truth which is gained from tests. The last approach I will be assessing is the cognitive approach. This approach looks at the thought processes and the causes of it. This approach has much strength as it has plenty of evidence to show that if you change an individuals way of thinking then it can change their thought processes and altering the way a person thinks by reinforcing positive thoughts in their minds can be seen as effective treatment. However these studies can be seen as biased as everyone gets some sort of irrational thoughts and there is less evidence to show that it is these irrational thoughts that are the cause of disorders. Lastly this approach only states the obvious and doesn?t covey its views through evidence and proof therefore it is seen as unreliable. ...read more.

This essay aimed to examine various psychological perspectives. Appropriate theories were identified and it did appear that the writer had a good understanding of them. However for this understanding to come through more clearly, there is a need to proofread the work carefully as there were frequent grammar errors.
There were several comments regarding research, but there was no evidence of these studies, i.e. they should be named. This strengthens the points the writer makes about strengths and weaknesses.
3/5