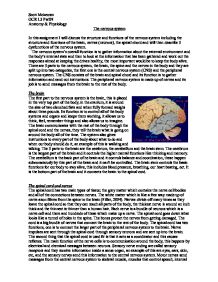 Motor nerves send messages from the central nervous system to skeletal muscle, muscles that control speech, internal organs, internal glands and sweat glands in the skin to bring a reaction. This information is then sent through nerves from the central nervous system to the rest of the body. The motor nerves are split into two, somatic and autonomic. The somatic nervous system send messages for potential actions to the skeletal muscles which are under voluntary control. The autonomic nervous system sends messaged for potential actions from the central nervous system to smooth muscle, cardiac muscle and certain glands. One dysfunction of the nervous system is Dementia. This is when the body stops all areas of mental ability. The cause is usually brain disease and doesn't get better once it starts because the cells in the brain have died however there are causes that can be reversed and memory brought back to its usual state, this is if it is caused by depression, drug intake, thyroid problems, a lot of alcohol intake or certain vitamin deficiencies. The most common way to spot dementia is a loss of intellectuality It is mostly caused from cerebro-vascular diseases such as alzheimer's disease. ...read more.