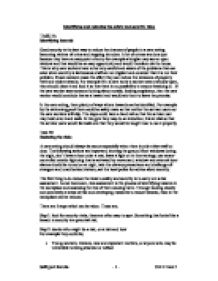 Identifying and reducing the safety and security risks in a care setting.

Identifying and reducing the safety and security risks TASK 5A Identifying hazards Good security is the best way to reduce the chances of people in a care setting becoming victims of crime and stopping intruders. A lot of crimes are done just because they have an easy point of entry for example a burglar may see an open window and that would be an easy opportunity and would therefore rob the house. This is why care workers have to be very careful and aware of the problems that can arise when security is lax because staff are not vigilant and consider that it is not their problem. If care workers make the effort they can reduce the instances of property theft and violent attacks. For example if in a care home a worker sees a window open, they should close it and lock it so that there is no possibility in anyone breaking in. If the care worker sees someone lurking about outside, looking suspicious, then the care worker would conclude that as a hazard and would ask them to leave the premise. In the care setting, there plenty of ways where hazards can be identified. For example by the swimming pool there could be safety mats so that neither the service users nor the care workers will slip. The steps could have a hand rail so that the service user may hold onto it and walk. In the gym they may do an induction, this is vital so that the service users would feel safe and that they would be taught how to use it properly. ...read more.

An intermittent alarm could indicate that the fire is not in the immediate building but elsewhere on site. One short alarm could indicate a test. Fire alarms are normally activated by a red break glass box that should be visible in an accessible position. Once activated they can only be switched off from a central control box. Often these alarms are directly linked to the local fire station. If necessary another method of raising the alarm is to use the internal telephone system. In larger care establishments there should be a special short telephone number that will be answered immediately if rang. Equipment Fires don't just happen, a fire needs three things to make it occur. Remove one of the elements of a fire and the fire risk disappears. Good fire safety practice can remove some of these factors, but once a fire has started it is the role of fire extinguisher to tackle a fire by attacking one of its element's. All care environments should provide a fire extinguisher of various types throughout their buildings. These are several types of extinguisher available and they work in different ways. They all interrupt the fire process by either removing heat from the fire or by removing oxygen from the fire or both. They each have different advantages and problems. A person should never attempt to tackle a fire unless they are confident that they can do so safety, for example when: * They have already raised the alarm * They have a clear unobstructed route away from the fire in case it grows larger * They are confident of their ability to operate the extinguisher There are different types of extinguishers. ...read more.

A suspicious package that cannot be identified should not be moved or opened until it has been identified. The vast majority of these objects prove to be perfectly harmless. However if a suspicious item is discovered then all care workers and service users may have to evacuate the building. The fire drills are a quicker way to do this. 5E Maintaining security Safety features promote the safety and security of users and staff. To maintain security, identity cards can be issued to help identify who visitors and staff are. An identity card consists of a picture of the care worker on her/his own. It would also contain their name and details about where they work or who they are. Temporary cards can be issued to people who are visiting or are entering the building for repairs etc. most of these, do not have to have a picture of the individual however may consists of information of where they are from. This allows the building to remain safe from any people may cause a risk at the place. For example a strange man could enter a nursery full of young children, if this process is not being used. This process allows the registration of all people moving about in the care setting and helps to identify who they are. Many employers identify their staff by giving them a uniform and a name badge. This, together with an identity card, makes identificatition immediate. It is also vital that the care workers wear a uniform. This identifies in which area they work in and what they do. This could make them recognisable for visitors and by the service users. ?? ?? ?? ?? Saffiyyah Karolia - 1 - Unit 4 Task 5 ...read more.