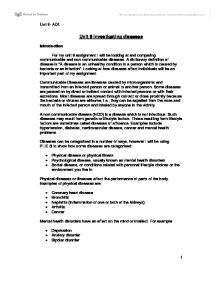 Investigating Diseases. I will be looking at and comparing communicable and non communicable diseases. HIV and lung cancer.

Unit 9 investigating diseases Introduction For my unit 9 assignment I will be looking at and comparing communicable and non communicable diseases. A dictionary definition of disease is "A disease is an unhealthy condition in a person which is caused by bacteria or an infection". Looking at how diseases affect individuals will be an important part of my assignment. Communicable Diseases are illnesses caused by microorganisms and transmitted from an infected person or animal to another person. Some diseases are passed on by direct or indirect contact with infected persons or with their excretions. Most diseases are spread through contact or close proximity because the bacteria or viruses are airborne, i.e., they can be expelled from the nose and mouth of the infected person and inhaled by anyone in the vicinity A non communicable disease (NCD) is a disease which is not infectious. Such diseases may result form genetic or lifestyle factors. Those resulting form lifestyle factors are sometimes called diseases of affluence. Examples include hypertension, diabetes, cardiovascular disease, cancer and mental health problems. Diseases can be categorised in a number of ways, however I will be using P.I.E.S to show how some diseases are categorised: * Physical disease or physical illness * Psychological disease, usually known as mental health disorders * Social disease, or conditions related with personal lifestyle choices or the environment you live in Physical diseases or illnesses affect the performance of parts of the body. Examples of physical diseases are: * Coronary heart disease * Bronchitis * Nephritis (inflammation of one or both of the kidneys) * Arthritis * Cancer Mental health disorders have an effect on the mind or intellect. For example: * Depression * Anxiety disorder * Bipolar disorder Personal lifestyle or environmental disorders occur from social deprivation, relationships or those which have their roots in our personal activities, for instance: * Alcoholism * Substance abuse * Sexually transmitted diseases. ...read more.

Socially- May feel too weak to socialise with their friends therefore they may not spend their time with them as much. Headache Headaches involve mild to severe pain in one or more parts of the head as well as the back of the neck and are painful and annoying. This can affect a person: Physically- they may feel tired and weak due to the headaches Intellectually- they will find it hard to think due to the pain in the head Emotionally- they will feel upset and low self esteem about themselves Socially- they may not feel like going anywhere due to the pains in their head. They may feel too ill to socialise with others. Nausea/ vomiting Nausea is an uneasiness of the stomach that often accompanies the urge to vomit but doesn't always lead to vomiting. Vomiting is the forcible voluntary or involuntary emptying ("throwing up") of stomach contents through the mouth. This can affect a person: Physically- the body may become weak and pale and cause de hydration. Intellectually- they may not be able too concentrate on other things. Emotionally- they will feel low self esteem and will feel upset and sad most of the time. This could depress the person by thinking negative thoughts about themselves Socially- they will feel too ill to socialise with others, they may fear what others may think of them if they throw up in front of them. Weight loss Weight loss is a reduction of the total body mass and fluid loss in your body. Physically- their body will start to lose weight. Intellectually- they may start to worry about what is happening to their body, this could lead to stress and depression. Emotionally- they will feel low self esteem about themselves Socially- they may not want to socialise with friends as much as before because they might be worried about what they will think and they might start asking questions. ...read more.

However, as you become more unfit, you will be even more tired when you try to do something. It might also be a result of a reduced oxygen absorbent level. Intellectually- Will not be able to concentrate on other things much as you feel tired most of the time. Emotionally- this will cause you to stress and worry as you are not having enough rest. Socially- you may not feel like socialising with others and having fun as you feel tired most of the time. Weight loss Weight loss is when you loose a lot of body fat and fluid inside the body. This can affect a person: Physically- the body will start to feel weaker and you may feel you are turning bony. Intellectually- they may start to worry about what is happening to their body, this could lead to stress and depression. Emotionally- they will feel upset and low self esteem about themselves Socially- they may not want to socialise with friends as much because they might be worried about what they will think and they may start asking questions. How the body responds to lung cancer Researchers have shown that a protein called SLC significantly slows down the growth of lung cancer by stimulating an immune response against the disease. SLC, found in the lymph nodes, is part of a group of proteins called chemokines. Chemokines have the ability to attract powerful white blood cells called lymphocytes and dendritic cells, which are central to the immune system's ability to recognize cancer and stimulate an attack against tumor cells. When injected into tumors SLC attracts lymphocytes and dendritic cells to the tumor, where it is believed that they corner and attack the cancer cells. Dendritic cells usually are unsuccessful in stimulating the body to fight cancer, even though cancer cells express abnormal proteins and molecules. Scientists believe that cancer can trick the immune system and prevent dendritic cells from responding against tumor cells. Unit 9- AO1 1 ...read more.

Overall a very well researched essay. The writer has managed to explain some quite technical biological points well. There is a very detailed section regarding the symptoms and the effects on PIES. It could be expanded by discussing a little more on the impacts of the disease in the long term.