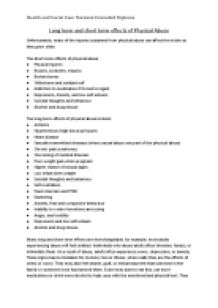 * Heart disease ? This is where the heart's blood supply is blocked or interrupted by a build-up of fatty substances in the coronary arteries. It can cause premature death. * Sexually transmitted diseases (where sexual abuse was part of the physical abuse) * Chronic pain syndromes ? This leaves you in a lot of pain for the reminder of your life. * Worsening of medical illnesses ? This is where something like diabetes isn?t attended to due to a priority of not being abused rather than take medication. * Poor weight gain when pregnant ? This can cause complications during pregnancy, labour and child birth, as there won?t be significant nutrients for the baby. * Higher chance of miscarriages * Low infant birth weight * Suicidal thoughts and behaviour ? This is a more dangerous long term affect as it can lead to the individual causing harm to themselves and ultimately killing themselves. * Self-mutilation ? This is an unhealthy coping strategy that could be developed. * Panic disorder and PTSD ? These can also develop over time due to the trauma. ...read more.

This can after you later on in life as your body will only be able to tolerate certain things. * Permanent nerve damage ? This can cause loss of feeling to any part of the body meaning it would become inoperable. * Weakened bones/joints from breakages ? This would mean a reduced amount of mobility and agility as it will be painful and difficult to be so. * Hair loss and bald spots ? This doesn?t have following physical effects but can cause low self-esteem and depression from social isolation. * Internal damage of digestive system from poisoning ? Lack of useable organs that function properly for either a short while, or a long time. * Depression and anxiety ? this can link in with psychiatric disorders, disfigurement, and social isolation as they can all cause low self-esteem and confidence issues. * Psychiatric disorders * Disfigurement * Social isolation * Permanent weakness or numbness in certain areas of the body ? This can mean less of a chance to be able to be physically active whenever suited. * Loss of limb ? ? ? * Multi-organ damage and/or failure ? This can cause major concerns because if two or more organs start failing at the same time then it is less likely to be salvageable. ...read more.