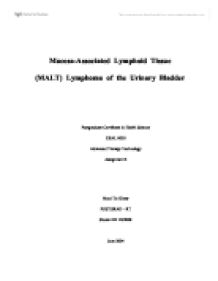 Lymphoma of the Urinary Bladder

Mucosa-Associated Lymphoid Tissue (MALT) Lymphoma of the Urinary Bladder Postgraduate Certificate in Health Science HEAL 8010 Advanced Therapy Technology Assignment 2 Mooi Tin Khaw POSTGRAD - RT Student ID 1195808 June 2004 Mucosa -associated lymphoid tissue (MALT) are specialised lymphoid tissue that evolved to protect permeable mucosal sites such as the gastrointestinal tract and the bronchi that are directly in contact with the external environment (Isaacson & Norton, 1994). MALT lymphoma was first isolated in 1983 by Isaacson and Wright from 2 cases of low grade B-cell gastrointestinal lymphoma (Thieblemont, 1995). It is a distinctive type of malignant B-cell lymphoma (Tsang et al, 2001). Literature review showed that MALT lymphomas also arise at sites such as lung, trachea, thymus, skin, gall bladder, salivary glands and bladder. MALT lymphoma is now incorporated into the Revised European-American Lymphoma (REAL) and the World Health Organisation (WHO) classification systems as extranodal marginal zone B-cell lymphoma. (Tsang et al, 2001). Isaacson & Norton (1994) reported 13% of patients with lymphoma have evidence of involvement of the lower urinary tract. Primary lymphoma of the urinary bladder is a rare tumour. The first recorded case of lymphoma of the bladder was reported by Eve and Chaffey in 1885. Oshawa et al (1993), (cited: Acenero et al 1996) reported that 70 cases have been found since 1885. Most are low grade of non-Hodgkin's lymphoma of B-cell type and 20 % were high grade and 3 cases, Hodgkin's disease. It was reported by Tasu et al (2000), that it represents less than 1 percent of the urinary bladder neoplasms and between 0.15% and 0.2% of all extranodal lymphoma cases. Mucosa associated lymphoid tissue (MALT type) of the urinary bladder is the most common primary bladder lymphoma. It was first described by Kempton et al in 1990. It is rare and with less than 100 cases reported in the current literature. It was difficult to distinguish this lesion from other vesical or extravesical neoplasms, therefore required specialised and extensive diagnostic tests (Cohen et al 2002). ...read more.

Urinary frequency and nocturia was improved. There was no haematuria. Her general condition was fine. Fraction 4: Patient tolerated RT well. The patient completed treatment in mid February 2003. Discussion Literature review showed that MALT type lymphoma is the most common type of primary lymphoma of the urinary bladder (Kempton et al, 1997). Only 14 cases of primary MALT lymphoma of the urinary bladder have been reported since 1990. Because they are rare, most examples in the literature have been reported in small number of cases (Cohen et al, 2002, Wazait et al, 2000). Incidences The MALT lymphoma of urinary bladder was more common in elderly women (average age 58.7) Males 45%: females 55%. Several authors identified that the disease usually occurred in women (Pawade et al, 1993., Kempton et al ,1997).The higher population of females with this disease maybe reflected bt the high incidence of chronic cystitis in women (Oshawa et al,1993, cited:Wazait et al, 2001). The case reported in our department was a female of 78 years old. In 1983, Isaacson and Wright made the observations that certain extranodal lymphomas were related to mucosa-associated lymphoid tissue (MALT) rather than nodal lymphoid tissue. The term MALT emerged from the observation that mucosal sites such as gastrointestinal tract and bronchi harbour specialised lymphoid tissue to protect them. Peyer's patches (unencapsulated aggregates of lymphoid cells which bear similarities to lymph nodes and contain B and T-cell areas) in the terminal ileum is the most well known example of MALT. Lymphomas of MALT type was initially observed in the gastrointestinal tract but similar tumour were soon recognised in other sites such as salivary gland, thyroid and lung (Isaacson & Norton, 1994). These extranodal lymphomas became known as MALT lymphomas. The MALT lymphoma of the urinary bladder was first described by Kempton et al in 1990. It is now widely accepted that MALT lymphomas represent a distinct subset of B-cell malignancy that differs from other low grade B cell lymphomas in its morphologic immunophenotypic and clinical characteristics. ...read more.

Excellent local control-100% local control rate with stage 1 and 2.has been reported by Schecter et al (cited Tsang 2001). A case reported by Yuille et al (1998) received RT dose of 40Gy in 20 fractions over 29 days to the bladder as planned volume and was well tolerated by 80 year female patient. While literature supports RT as the therapeutic modality alone as the favourable treatment option to the whole bladder, there is consideration for multimodality therapy approach in some cases. This case reported in our department had RT treatment to the whole bladder region in 2 phases. These tumours are in general very radiosensitive. We anticipated good volume reduction even with relatively small doses of RT. That was the reason for repeating CT after 10 fractions. However, she had considerably residual tumour in the repeated CT Figure 3b. We did not achieve much volume reduction as expected. Therefore RT treatment was continued to deliver a total tumour dose of 40Gy. Prognosis Prognosis of MALT lymphomas confined to the bladder in common with other sites generally carry a good prognosis and little tendency to disseminate (Bates et al, 2000) Patients have a good result, with long disease free survival (Thieblemont et al 2000). Although only a small number of cases have been reported by several authors, the prognosis of MALT-type lymphoma confined to the bladder appears to be favourable. From a study by Pawade et al, (1993) only one patient with MALT -type of the bladder has been reported to died of the disease. One case reported by Yuille et al (1998), had quite similar presentation of the case described in our department- both patients were elderly and had large mass in the posterior wall of the bladder indicated in CT finding. Both patients received 40Gy in 20 fractions to the bladder as the planned volume. Both patients tolerated RT well The case reported in our department is still alive and is reviewed by the radiation oncologist at interval of 3 months. Follow up CT scans and cystoscopy showed no recurrence of tumour. Patient had shown excellent response to RT treatment. ...read more.