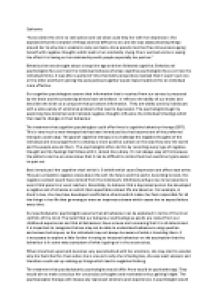 ﻿Catherine ?Anna visited the clinic to seek advice and see what could help her with her depression. She explained that the simplest of things seemed difficult to do and she was always blaming things around her to why she is unable to carry out tasks. Anna spends most her free time preoccupying herself with negative thoughts which lead to her constantly crying. She is worried as she is seeing the effect it is having on her relationships with people especially her partner.? Behaviourism was brought about a long time ago and then followed cognitive. Behavioural psychologists focus on how the individual behaves whereas cognitive psychologists focus on how the individual thinks. It was after a period of time that both perspectives realised that it wasn?t just one or the other and that it joining the perspectives together would make treatment for an individual more effective. Our cognitive psychologists assume that information that is received from our senses is processed by the brain and the processing directs how we behave. It refers to the ability of our brains and describes the brain as a computer that processes information. They are widely used by individuals with a wide variety of emotional problems that lead to depression. The psychologists begin by examining how distorted and irrational negative thoughts influence the individual?s feelings which then lead to changes in their behaviour. ...read more.

Even when she is unsure to why she is feeling low, she was want answers and therefore could end up making up things which lead to negative thinking. The treatment that psychodynamic psychologists would offer Anna would be psychotherapy. They would aim to make conscious her unconscious thoughts and motivations thus gaining insight. The psychoanalysis therapy will release any repressed emotions and experiences. A psychologist would ask Anna to lie down on a couch for example to be able to relax. They would sit behind Anna and take down notes while asking her to talk about her dreams and any childhood memories. They would want her to remember and recognise the positive memories and thoughts that were once visible to her to encourage her conscious mind to believe that there is possibility for positivity. A therapist employing psychoanalytic techniques may work with Anna to identify unconscious beliefs which may underlie or maintain the problems such as in the case of a child who may have learnt that feelings and thoughts were to be brushed under the carpet. However, both treatments have its limitations. Cognitive behaviour therapy will not suit everyone. An individual will be required to be very committed and persistent in tackling their health problem with the help of their therapist. It can be considered as hard work as it involves taking the individual out of their comfort zone to be able to tackle situations and this can often be seen as very challenging for some people. ...read more.

An image will be shown to her of her least feared situation as she is encouraged to relax until she is able to view it without feeling a sense of fear or anxiety. This can often take more than one session. When the least feared situation has been satisfactorily overcome, Ethel will be able to move onto the next situation at the next level, working on relaxing until they are able to view that situation without a trace of fear or level of anxiety. This treatment gets repeated over a period of time until the final most feared situation can be faced without Ethel feeling any worry. Our cognitive psychologists would help Ethel by offering her cognitive behaviour therapy to help desensitise anxiety through exposure to feared situations. The therapy is based on the idea that unhelpful and unrealistic thinking leads to negative behaviour. It aims to break this cycle and find new ways of thinking that can help you behave in a more positive way. The therapist will identify a feared situation for Ethel and try to shift a more positive thought that the situation although being unpleasant, is not fatal to her and will pass. Cognitive behaviour therapy is usually combined with exposure therapy so the therapist will set relatively modest goals at the beginning of the treatment like just going to a local shop. As Ethel becomes more confident over time, the goals set will become more challenging such as going to a larger supermarket for example. ...read more.