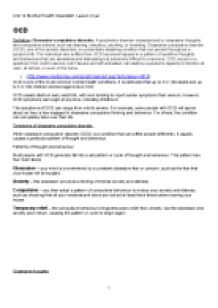 ﻿Unit 14 Mental Health IssuesA01 Lauren Cryer OCD Definition: Obsessive-compulsive disorder: A psychiatric disorder characterized by obsessive thoughts and compulsive actions, such as cleaning, checking, counting, or hoarding. Obsessive-compulsive disorder (OCD), one of the anxiety disorders, is a potentially disabling condition that can persist throughout a person's life. The individual who suffers from OCD becomes trapped in a pattern of repetitive thoughts and behaviours that are senseless and distressing but extremely difficult to overcome. OCD occurs in a spectrum from mild to severe, but if severe and left untreated, can destroy a person's capacity to function at work, at school, or even in the home. 1. (http://www.medterms.com/script/main/art.asp?articlekey=4610) OCD is one of the most common mental health conditions. It is estimated that up to 3 in 100 adults and up to 5 in 100 children and teenagers have OCD. OCD usually starts in early adult life, with men tending to report earlier symptoms than women. However, OCD symptoms can begin at any time, including childhood. The symptoms of OCD can range from mild to severe. For example, some people with OCD will spend about an hour a day engaged in obsessive compulsive thinking and behaviour. For others, the condition can completely take over their life. Symptoms of obsessive compulsive disorder While obsessive compulsive disorder (OCD) is a condition that can affect people differently, it usually causes a particular pattern of thought and behaviour. Patterns of thought and behaviour Most people with OCD generally fall into a set pattern or cycle of thought and behaviour. This pattern has four main steps: Obsession ? your mind is overwhelmed by a constant obsessive fear or concern, such as the fear that your house will be burgled. Anxiety ? this obsession provokes a feeling of intense anxiety and distress. Compulsion ? you then adopt a pattern of compulsive behaviour to reduce your anxiety and distress, such as checking that all your windows and doors are locked at least three times before leaving your house. ...read more.

missing meals (fasting) 3. avoiding eating with other people 4. hiding food 5. cutting food into tiny pieces ? to make it less obvious that they have eaten very little, and to make the food easier to swallow 6. taking appetite suppressants, such as slimming pills or diet pills They may also drink lots of fluids that contain caffeine, such as coffee, tea and low-calorie fizzy drinks, as these can provide a low-calorie, short-term burst of energy. Some people with anorexia also begin to use illegal stimulant drugs known to cause weight loss, such as cocaine or amphetamines. People with anorexia often believe that their value as a person is related to their weight and how they look. They think other people will like them more if they are thinner, seeing their weight loss in a positive way. They often have a distorted view of what they look like (their body image). For example, they think they look fat when they are not. They may try to hide how thin they are by wearing loose or baggy clothes. Many people will also practise a type of behaviour known as ?body-checking?, which involves persistently and repeatedly: 1. weighing themselves 2. measuring themselves, such as their waist size 3. checking their body in the mirror Anorexic people usually have low self-esteem or self-confidence. They may withdraw from relationships and become distant from members of their family and friends. Anorexia can also affect the person?s school work or how well they perform their job. They may find it difficult to concentrate, and they might lose interest in their usual activities. They may have few interests, even though they seem busier than usual. Eating too little for a long time can result in physical symptoms, such as: 1. fine downy hair growing on their body 2. more hair on their face 3. their pubic hair becoming sparse and thin 1. ...read more.

aims to identify whether your relationships with others may be contributing toward feelings of depression. Again, IPT is usually provided in 4-6 weekly sessions. Antidepressants The use of antidepressants may be recommended if: 1. you have moderate postnatal depression and a previous history of depression 2. you have severe postnatal depression 3. you have not responded to counselling or CBT, or would prefer to try tablets first A combination of talking therapies and an antidepressant may be recommended. Antidepressants work by balancing mood-altering chemicals in your brain. They can help ease symptoms such as low mood, irritability, lack of concentration and sleeplessness, allowing you to function normally and helping you cope better with your new baby. Contrary to popular myth, antidepressants are not addictive. A course usually lasts six to nine months. Antidepressants take two to four weeks to start working, so it is important to keep taking them even if you do not notice an improvement straight away. It is also important to continue taking your medicine for the full length of time recommended by your doctor. If you stop too early, depression may return. Between 50 and 70% of women who have moderate to severe postnatal depression improve within a few weeks of starting antidepressants. However, antidepressants are not effective for everyone. Antidepressants and breastfeeding The selective serotonin reuptake inhibitors (SSRI) types of antidepressants are usually recommended for women who are breastfeeding. Tests have shown the amount of these types of antidepressants found in breast milk is so small it is unlikely to be harmful. Side effects of SSRIs include: 1. feeling sick 2. blurred vision 3. diarrhoea or constipation 4. dizziness 5. feeling agitated or shaky, 6. insomnia (not sleeping well) or feeling very sleep These side effects should pass once your body gets used to the medication. Discuss feeding options with your GP when you're making decisions about taking antidepressants. Many mothers are keen to continue breastfeeding because they feel it helps them to bond with their child and boosts their self-esteem and confidence in maternal abilities. These are important factors in combating symptoms of postnatal depression. ...read more.