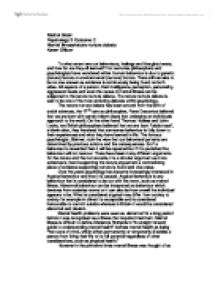 Rachel Sloan Psychology B Outcome 2 Mental Illness/nature nurture debate Karen Officer To what extent are our behaviours, feelings and thoughts innate, and how far are they all learned? For centuries philosophers and psychologists have wondered wither human behaviour is due to genetic (nature) factors or environmental (nurture) factors. There still remains to be no one answer as evidence is continuously being found on both sides. All aspects of a person, their intelligence, perception, personality, aggression levels and even the cause of mental illness can be subjected to the nature nurture debate. The nature nurture debate is said to be one of the most enduring debates within psychology. The nature nurture debate has been around from the birth of social sciences, the 17th century philosopher, Rene Descartes believed that we are born with certain inborn ideas that underpins an individuals approach to the world. On the other hand Thomas Hobbes and John Locke, two British philosophers believed that we are born "tabula rasa", a blank slate, they theorised that someones behaviour is fully down to their experiences and what they have learned in life. The famous psychologist, Skinner, took the view that our behavioral patterns are determined by previous actions and the consequences. So if a behaviour is rewarded then it will be repeated but if it is punished the behaviour will not reoccur. There have been many different arguments for the nature and the nurture side, it is a circular argument as more evidence is found supporting the nature arguement a contradicting piece of evidence supporting nurture is found and vice versa. Over the years psychology has become increasingly interested in Atypical behaviour and how it is caused. Atypical behaviour is any behaviour that is considered to be out with the norm, such as mental illness. Abnormal behaviour can be interpreted as behaviour which deviates from societies norms or it can also be how unwell the individual appears to be. ...read more.

The way in which the person views the world affects the way in which they act. This perspective believes that everyone has the ability to reach their full potential and self actualise. It is when someones self actualisation route is blocked that abnormal and mental illness may occur. The individual will begin to distort their view of the world and their reality will become dysfunctional. The higher the level of distorted reality and the lower the level of the individuals ability to connect with their own feelings the more serious the individuals condition is. Like the behaviourist views abnormal behaviour is said to be a reaction to the way the individual perceives the world. The phenomenological model is highly criticised as being to simplistic as it assumes that anyone who perceives the world in a negative light is mentally unhealthy but it may be the case that their life at that time isn't the most desirable. The phenomenological model also does not believe in mental health it doesn't exist it, it is just a distraction that some people gain on their way to actualisation. Today the medical/biological model is used at present time, this consists of the three models psychodynamic, behaviourist, and the phenomenological (or humanistic) all merged together. The linking of all three models together has led to the development of the diathesis-stress model which connects the physical, environmental and psychological aspects to the cause of mental illnesses. Schizophrenia is a disorder where the individuals thought processes, perceptions, emotions and behaviour are all disturbed. It is usually recognised from the age 14 to early 20's, there are some records of 4 year olds however it is extremely rare. Due to the hormone changes and puberty it is very difficult to notice as it is often regarded as being typical teenage angst. Schizophrenia carries a strong stigma that is probably due to the film industry for portraying them as being raving psychotic murderers, however this is exremely rare. ...read more.

This claims that people born with this difference on chromosome 22 will have a predistribution to develop schizophrenia. Contradictory to this is Gottesman's evidence that suggests that it is not entirely derived from genetics, the environment must play a part too. In 1983, Kety found more evidence on biological side, by studying adopted children whos adopted parents were suffering from schizophrenia, his results suggest that it is a heredictory disorder as adopted children did not develop the disorder, however it is not clearly explained as to what is being inherited. According to the biological approach an abnormal excess amount of dopamine is a cause of schizophrenia, Snyder,1976. Davis (1974) investigated the effects of injecting schizophrenics with dopamine and results concluded that mild schizophrenics became worse and depending on dosage some became extreme schizophrenic behaviour within minutes. Phenothiazine studies have given their added support to Snyder's dopamine hypothesis as they have shown that schizophrenic symptoms are reduced when D2 receptors (dopamine receptors) are blocked. PET scans show that schizophrenics have enlarged ventricles, a reduced blood flow, underdeveloped brain tissue and an increased matabolic activity of the brain. Crow (1985) stated his belief that schizophrenia is built up of two causes, in his two-syndrome hypothesis. The first being the distorted neurotransmitters (dopamine) this results in the individual experincing positive symptoms and the second type being cerebral damages this resulting in negative symptoms. Nurture nature debate is extremely complex and within mental illness it is hard to conclude which holds more evidence. It is clear that over the years the beliefs and accepted causes of mental health have changed dramatically. Within the example of schizophrenia it is clearly evident how complicated the nature nurture debate is. As evidence from Gottesman clearly contradicts any arguements for nature arguement however Davis's dopamine hypothesis is a clear nature explanation rejecting nurture explanations. Now we can tell nature and nurture both play a part in mental illness, although some may be more one than the other, Schizophrenia however is clear to have aspects of both. ?? ?? ?? ?? ...read more.