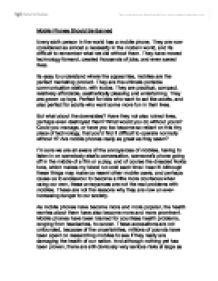 Mobile Phones Should Be Banned

Mobile Phones Should Be Banned Every sixth person in the world has a mobile phone. They are now considered as almost a necessity in the modern world, and its difficult to remember what we did without them. They have moved technology forward, created thousands of jobs, and even saved lives. Its easy to understand where the appeal lies, mobiles are the perfect marketing product. They are the ultimate portable communication station, with kudos. They are practical, compact, relatively affordable, aesthetically pleasing and entertaining. They are grown up toys. Perfect for kids who want to act like adults, and also perfect for adults who want some more fun in their lives. But what about the downsides? Have they not also ruined lives, perhaps even destroyed them? What would you do without yours? Could you manage, or have you too become so reliant on this tiny piece of technology, that you'd find it difficult to operate normally without it? Are mobile phones really as great as they seem? I'm sure we are all aware of the annoyances of mobiles, having to listen in on somebody else's conversation, someone's phone going off in the middle of a film ...read more.

You may think this is extreme, but no one yet has been able to categorically state that mobile phones are safe; the worry is that we just don't know. And if your health were at serious risk, wouldn't you want to know about it, even if the evidence wasn't entirely conclusive? And this is by no means the only danger. Approximately 1.3 million mobile phones were stolen last year in the UK alone, and they are involved in one third of all robberies. These are violent crimes, in which the victim is sometimes threatened at knifepoint, and is often injured, and even killed. People are mugged for their mobiles day and night, no matter what age, gender or race they are, and no amount of phone disabling features will stop that. Ironically, many people buy mobiles to make them feel safer, so they know they can phone someone if in trouble. But having a mobile phone will actually increase your chances of being attacked, which is not what I'd call a safety feature. Children in particular are suffering at the hands of mobile phones. ...read more.

Her parents had no way of protecting her. They supervised her computer use, but had no way of monitoring what she did on her mobile. And this case is not a one off. All over the technologically advanced Japan, chatrooms are being used for such procedures, and it is becoming an increasingly common occurrence in Britain too. I can't deny that mobile phones have brought instant communication to the millions, be they in the bath, on the bus or up a mountain. I can't deny that they are efficient, attractive, companionable, and have designer kudos. But, when you use your phone, are you not just creating a flashing neon sign which says 'mug me'? Are you not just holding yet another cancer stick to your head? We can talk about the positive points of mobiles till the cows come home, but by doing that, are we just side-stepping the real issues, are we covering up mobiles with personalised ringtones and countless varieties of candy-coloured cases so that we don't have to address the real problems, telling ourselves that if they look pretty, and can do so many great things that they surely can't do and harm? Is your mobile phone really as great as it seems? Or is it a wolf in sheep's clothing? ...read more.