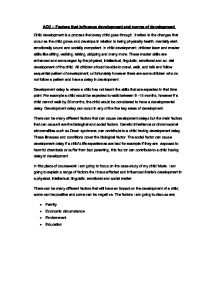 n this piece of coursework I am going to focus on the case study of my child Marie. I am going to explain a range of factors that have affected and influenced Maries development in a physical, intellectual, linguistic, emotional and social matter.

AO2 - Factors that influence development and norms of development Child development is a process that every child goes through. It refers to the changes that occur as the child grows and develops in relation to being physically health, mentally alert, emotionally sound and socially competent. In child development, children learn and master skills like sitting, walking, talking, skipping and many more. These master skills are enhanced and encouraged by the physical, intellectual, linguistic, emotional and social development of the child. All children should be able to crawl, walk, and talk and follow sequential pattern of development; unfortunately however there are some children who do not follow a pattern and have a delay in development. Development delay is where a child has not learnt the skills that are expected in that time point. For example a child would be expected to walk between 9-15 months, however if a child cannot walk by 20 months, the child would be considered to have a developmental delay. Development delay can occur in any of the five key areas of development. There can be many different factors that can cause development delays but the main factors that can cause it are the biological and social factors. Genetic inheritance or chromosomal abnormalities such as Down syndrome, can contribute to a child having development delay. These illnesses and conditions cover the biological factor. The social factor can cause development delay if a child's life experiences are bad for example if they are exposed to harmful chemicals or suffer from bad parenting, this factor can contribute to a child having delay in development. In this piece of coursework I am going to focus on the case study of my child Marie. I am going to explain a range of factors that have affected and influenced Marie's development in a physical, intellectual, linguistic, emotional and social matter. There can be many different factors that will have an impact on the development of a child, some can be positive and some can be negative. ...read more.

Living in poor housing conditions could have caused Marie to become ill and this may be the reason why she suffered from being underweight. For example at 3 months Marie should have been weighing 12.5 pounds but instead she was weighing 7 pounds which is seriously under the norm. I know that Marie never walked and this could be because her mother never let her down on the ground to crawl as the condition of the house may have been very bad. Toddler As a toddler Marie was still not reaching the norm as she was under the general weight. At 15 months, Marie only weight 19 pounds and she should have been weighing 23.26 pounds, even though Marie being premature could contribute to her being underweight, it could also be the cause of not having enough money to feed Marie a proper dinner, therefore her mother may have had to focus on her budget and focus on the quantity of the food brought into the house rather than the nutritional value, as food with nutritional value is quite expensive. Marie's height was also below the norm as a toddler and in order to grow in height you need good food and again, Marie's mother must not have been able to afford good food, therefore this may be why she is below the norm. Pre-school As a pre-schooler, Maries height was still below the norm but not by much because at 3 years of age Marie should have been weighing 30.8 pounds and she weighed 30 pounds, this indicates to me that Marie's mother may have been informed about how underweight she was during infancy and toddlerhood and therefore her mother saved to buy nutritious food so that they could put on weight and be healthy also they could have moved to a better house where the conditions of the house were better and therefore Marie may not have been ill anymore. ...read more.

Social development Infant Marie's social development is quite advanced throughout the two patterns of development for this type of development. At 6 months Marie spend a lot of time observing and watching. The education factor could have impacted on this because if Marie was at a child care minding facility with other infants around her, she would probably be constantly observing and alert, therefore this could impact on her social development throughout the other stages of her life. Toddler As a toddler Marie didn't want to play on her own. Education probably impacted on this because if she was at a day care minding facility while her mother was running errands, she was probably encouraged to bond and socialise with the other children, therefore education as impacted on Marie in a positive way. Pre-school Marie played with the children in pre-school and shared toys and took turns with them. Education has impacted on this because this is the way pre-school operates. It is about learning children how to share and co-operate with each other in a good manner so that they learn the skills that are required when they go to primary school. School age At school Marie found criticism hard to handle. She experienced this at an early age before most children do and this could be down to education. She may have been bullied due to her background as she may have had poor hygiene because she comes from a low income family and her mother may not be able to afford water bills etc. Conclusion Looking at these four factors has expanded my knowledge that many factors can affect a child's development in so many different ways. Some of the factors influenced Marie's development in a positive way and a negative way but I believe the main factor that really influences a child is their family as these are the first people children bond with in their lives. They have a really big impact on them and it is down to family in what factors can affect their development in a positive or negative way. ...read more.