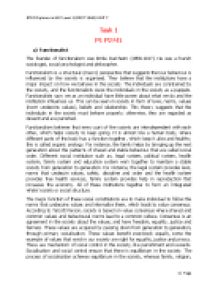 Transfer-Encoding: chunked ﻿BTEC Diploma in HSC Level 3 (FIRST YEAR) UNIT 7 Task 1 P1 P2 M1 1. Functionalist The founder of functionalism was Emile Durkheim (1858-1917). He was a French sociologist, social psychologist and philosopher. Functionalism is a structural (macro) perspective that suggests that our behaviour is influenced by the society is organised. They believe that the institutions have a major impact on how we behave in the society. The individuals are constrained by the society, and the functionalists views the individuals in the society as a puppets. Functionalists says we as an individual have little power about what we do and the institution influences us. This can be seen in society in form of laws, norms, values (norm underpins values), beliefs and relationship. This theory suggests that the individuals in the society must behave properly; otherwise, they are regarded as deviant and are punished. Functionalism believes that every part of the society are interdependent with each other, which helps society to keep going. It is almost like a human body, where different parts of the body has a function together, which keep it alive and healthy; this is called organic analogy. For instance, the family helps by bringing up the next generation about the patterns of shared and stable behaviour that are called social order. Different social institution such as, legal system, political system, health system, family system and education system work together to maintain a stable society from generation to generation. For instance, the legal system provides laws, norms that underpin values, safety, discipline and order and the health system provides free health services, family system provides help in reproduction that increases the economy. All of these institutions together to form an ?integrated whole? society or social structure. The major function of these social constitutions are to make individual to follow the norms that underpins values and internalize them, which leads to value consensus. ...read more.

Theorist have been concerned about the impact of social inequality on women?s health and dual role of women. 1. Interactionism The founder of interactionism was Max Weber. Interpretivist describe that the society and the social structure are seen as the creation of individuals. Unlike functionalists, they see individuals of the society as actors not as puppets. The individuals have free will and are able to make choices of their own. Unlike in the functionalism, the power come from bottom to up. They believe that the people?s choices or decisions are influenced by how they make sense of social situations. For instance, marriage means different things to different person; an individual whose parents are divorced might have negative definition of marriage, whereas the individual who have grown up in a good family might have positive definition of marriage. The Interpretivist suggests that people make impression on how you perceive symbols, they make impression on what you wear. For instance, people will make assumption that you are smart, just because you wear glasses. These theorists are concerned with the small or micro scale situations rather than the systems, they focus on the individuals in social interaction situations. Interpretivist believe that our identity is based on how we see ourselves or how other sees us. For instance, if a student in the school is praised and us labelled as smart, then he/she might do better his/her studies as this helps to boost their self-esteem. We get influenced by media, friends and family about how we see ourselves. According to Browne labelling refers to ?defining a person or a group in a certain way-as a particular ?type? of person or a group?. According to Interpretivist people are attached to the labelled and it can actually damage some group of people such as disabled people. The person labelled behaves in the same way expected and they have fulfilled the prophecy and lived up to the label. ...read more.

This model believes that health is a relative concept and a social construct. For instance, being voluptuous centuries ago was a sign of good health, but today?s day it is regarded as health issue or overweight. This model claims that ill health is caused due to social factors (including environmental factors). For instance people can get ill because of the unhealthy diet they are consuming, poor living condition or pollution. This model is critical of ?modern? medicine, which are elements of biomedical model. E.g. Iatrogenisis medicine caused deformity in the baby consumed by pregnant mother eaten for nausea sickness. It argues with the biomedical model saying that illness is not randomly distributed and are critical of the assumption that medical treatments has had the most important impact on improving health. Social model can explain why population level health improvements were achieved when social conditions improved late 19th/early 20th centuries due to the improvement of sanitation and supply of clean water the health of population improved, and argues it was not because free health services was delivered to the people. The strengths of social model of health is that it focuses population health and takes a broad range of factors into account and it is widely used and understood by health care practitioners in developed countries. This model offers board and flexible and inclusive way of understanding health and illness. Whereas the weakness of this model is they do not have a clear way of identifying or classifying health problems and this model cannot explain illness or many mental health problems where there are no physical signs or symptoms, which can be distressing. The social model cannot be used to address an individual?s health problems, especially where emergency care is needed. Reference Class notes Class hand-outs * National Health and Social Care Book 1 By Crittenden M. et al (2007) * Introduction to Sociology for Health Carers By Walsh, M. (2010) * Sociology as for OCR By Moore, S. et al (2005) | Page ...read more.