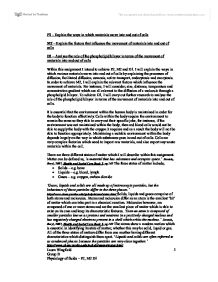 For instance, membranes within the lungs always have a concentration gradient as there is always diffusion of oxygen and carbon dioxide from the alveoli and into the circulatory system and visa versa. The membrane within the lungs which have become thick as a result of a build of carbon dioxide will affect the rate of diffusion within the lungs considerably. The membrane will be much thicker and molecules will therefore find it harder to diffuse over a larger distance, making the process of diffusion much slower. Another example is; if an artery is narrowed the diffusion rate will also be much slower. High cholesterol levels are associated with coronary heart disease and the build up of fatty deposits within the endothelium of the blood vessel will lead to the narrowing of the lumen. 'The distance over which diffusion occurs is known as the length of the diffusion pathway.' Boyle M and Senior K, 2002, Collins Advanced science Human Biology, pg 72 As a short diffusion pathway is required in order for molecules to diffuse into and out of cells effectively, cells are situated no more than several micrometres away from a capillary. The overall diffusion rate at which a substance diffuses through a membrane also depends on the surface area that is in contact with the substance. For example, the microvilli within the intestines has a large surface area due to the folding of the membrane. This will allow diffusion to happen quickly as there is more space and opportunity for the molecules to diffuse through into or out of the cell. Temperature can influence the rate of diffusion across a membrane as the movement of the molecules increases with an increase in temperature due to kinetic energy of the particles. Diffusion takes place faster at body temperature than it does at room temperature. The following formula was taken from; Bailey M & Hurst K, 2000, Collins advanced modular sciences Biology, pg 29 The rate at which a substance diffuses can be calculated using ...read more.

Other examples include; the mitochondrial inner membrane has high amounts of functional electron transport system proteins and the plasma membranes within the body has less protein due to fewer functions, the plasma membrane mainly carries out ion transport of materials across the membrane. A specific example of variations between cell membranes is the sarcolemma. Sarcolemma is the name given to the cell membrane of a muscle cell; skeletal, cardiac and smooth muscle. This type of cell membrane consists of a plasma membrane and also consists of a thin layer of polysaccharide material containing thin collagen fibres. As the sarcolemma is the membrane of a muscle cell it is specifically designed to receive and conduct stimuli. If any alterations are made in the sacrolemma it can potentially lead to a disorder known as; muscular dystrophy. Muscular Dystrophy can be defined as; 'The muscular dystrophies (MD) are a group of more than 30 genetic diseases characterized by progressive weakness and degeneration of the skeletal muscles that control movement.' http://www.ninds.nih.gov/disorders/md/md.htm#What_is The mechanism of one type of Muscular Dystrophy is the lack of functional dystrophin; meaning the cell membrane (sacrolemma) is not attached to the cytoskeleton and therefore when the muscles contract the cell membrane does not work together with the interior of the cell. The sacrolemma has calcium channel proteins within it and therefore, as a result of the laxity of the membrane these channel proteins will be unable to open leading to an increase in calcium ions within the cell. Overall within this assignment I have met the criteria in order to achieve P2, M2 and D1. I have looked at a range of processes which allow molecules to diffuse through the membrane. I have also explained some of the factors which can influence this and what effect they have on the membrane. I have also looked closely at the functions of the membrane itself. ?? ?? ?? ?? 1 Laura Wingfield Group B Physiology of fluids - P2, M2 D1 ...read more.