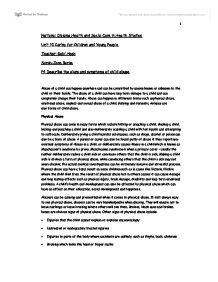 P4 Describe the signs and symptoms of child abuse

National Diploma Health and Social Care in Health Studies Unit 10 Caring for Children and Young People Teacher: Gabi Hesk Sarah-Jane Burke P4 Describe the signs and symptoms of child abuse Abuse of a child can happen anywhere and can be committed by anyone known or unknown to the child or their family. The abuse of a child can have long term damage to a child and can completely change their family. Abuse can happen in different forms such as physical abuse, emotional abuse, neglect and sexual abuse of a child. Bullying and domestic violence are also forms of child abuse. Physical Abuse Physical abuse can come in many forms which include hitting or smacking a child, shaking a child, kicking and punching a child and also deliberately scalding a child with hot liquids and attempting to suffocate. Deliberately giving a child harmful substances, such as drugs, alcohol or poison can also be a form of abuse. ...read more.

bites * Scalds and burns A change in a child's behaviour which could be seen by them withdrawn from situations or people or they may become sad or depressed could also be a sign of abuse. A child's sleep may also be disturbed as the situation is playing on their minds while they are asleep. Emotional Abuse Emotional abuse can include anything from verbal abuse and constant criticism to intimidation and manipulation. Emotional abuse works by constantly attacking a child in a verbal way, attacking the child's self-confidence, sense of self-worth and trust in them selves. This will be done by either constantly telling them off or belittling them or by intimidation. Emotional abuse can show signs such as: * Physical, mental and emotional development lags * Sudden speech disorders * Continual self-depreciation ('I'm stupid, ugly, worthless, etc') * Overreaction to mistakes * Extreme fear of any new situation * Inappropriate response to pain ('I deserve this') ...read more.

The neglect may not be deliberate but could indicate that the family need help or advice on raising their family. Signs Observed * Dirty skin, offensive body odour, unwashed/uncombed hair * Dirty and/or under/oversized clothing * Dressed inappropriately for weather or situation * Frequently left unsupervised or alone for periods of time Signs of Poor Health & Malnutrition * Drowsiness * Untreated upper respiratory infections, itching, scratching, long existing skin eruptions, frequent diarrhoea * Bruises, lacerations or cuts that are infected, untreated illnesses * Begging or stealing food, frequently hungry, rummaging through rubbish bins for food * Gorging self, eating in large gulps, hoarding food, obesity, overeating junk foods Signs which might also be seen in children of school age can include * Falls asleep in class, often seems in a fog or dream world * Comes to school early or late, does not want to go home * Troublesome at school, does no homework, refuses to try, destroys books, assignments and learning aids or toys * Withdrawn, overactive, underactive and/or lethargic (depressed) * Frequently absent or late for school ?? ?? ?? ?? 1 ...read more.