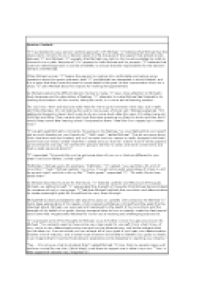 ﻿Session Content ?C? has decided to use a person-centred approach with Michael. ?C? believes that Michael has the resources to come to his own decision about his life. Because of the rapport that already exists between ?C? and Michael, ?C? suspects that Michael may look to him to acknowledge his right to choose his own path. Because of ?C?s? respect for both Michael and his parents, ?C? believes that a person centred approach would be of benefit, to ensure that the responsibility for the decision remains with Michael. When Michael arrives, ?C? begins the session by making him comfortable and asking some questions about his sports interests. Both ?C? and Michael are interested in touch football, and it is a topic that they have discussed in some detail in the past. As this conversation draws to a close, ?C? asks Michael about his reasons for making the appointment. As Michael explains the difficult decision he has to make, ?C? pays close attention to Michael?s body language and his description of feelings. ?C? attempts to make Michael feel listened to by making eye contact with him and by sitting forwards, in a more active listening position. ?As you know, Mum and Dad are really keen for me to go to University next year, but I really don?t like the idea. I?m not looking forward to more years of study yet,? Michael explained. ?I?m getting to the point where I don?t want to do any more study after this year, I?d rather hang out with Paul and Mica. Their parents don?t put the same pressures on them to study and they don?t mind if they travel after leaving school. ...read more.

?C? nodded and remained silent for a period. Michael also sat silently, thinking to himself. After a period, Michael replied, ?I think I need to think about it some more. I need to talk to my parents some more too. I?ve been a bit afraid to talk about it directly, in case they definitely say ?no?. I was thinking that I have to put in my selection for university soon, so perhaps I could apply for Medicine, but then defer for a year. It might be easier for Dad to accept, if I did this. What do you think about that?? ?C? replied, ?discussing some of your options with your parents is a good idea. Perhaps you might think about how you would approach them. How might you feel if they still did not accept your proposals?? ?I?d feel let down and angry. I think I?d want to leave home if that happened. I wouldn?t want to make a scene, but I do want to live my own life. I think that I would have to leave.? ?C? replied, ?That is a serious move, leaving home. Your goals must be very important to you indeed.? ?They are!?, Michael exclaimed. ?C? probed further into Michael?s feelings about the choices he wanted to make. In particular he asked Michael about approaching his parents to discuss his goals. ?C? focussed in on what Michael would say to his parents to let them know the seriousness of his intentions. ?C? also asked Michael to consider how his parents might react to his news. From this, Michael developed some strategies for himself to use when telling his parents of his intentions. ...read more.

She only drinks alcohol occasionally, once or twice a month she will have a few beers. She reports that she felt she was depressed while in her marriage but never sought counseling or treatment because her husband would have not let her. Family History: Mary states that her mother and father were divorced when she was 14 and she feels like she never got over that. She says ?I can just remember how they fought and yelled like I wasn?t even there. I hated that time in my life and I hated my parents.? She states her relationship with her mom is supportive now but she has little contact with her dad. Mary later found out that her dad was having affairs while he was married to her mom and Mary states that she just can not forgive him for putting them through that. Although Mary?s mom is supportive she lives about an hour away and works full time so Mary states ?I don?t want to burden my mom with my problems or my kids.? Mary is an only child. Occupational/Educational History: Mary was in college but dropped out when she got pregnant and married. She got a CNA license and started back to school a year ago to work toward getting a nursing degree. She works full time and lives paycheck to paycheck. She is worried about her job, saying, ?I just can?t get the motivation to do a good job?and sometimes I can?t even get out of bed to go in.? She is also ambivalent about being a nurse. She states that she should since she has been a CNA, but that she has no motivation to go to school anymore and her grades have been dropping. ...read more.