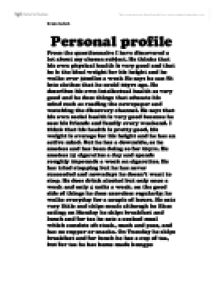 Personal profile From the questionnaire I have discovered a lot about my chosen subject. He thinks that his own physical health is very good and that he is the ideal weight for his height and he walks over 30miles a week He says he can fit into clothes that he could 20yrs ago. He describes his own intellectual health as very good and he does things that educate his mind such as reading the newspaper and watching the discovery channel. He says that his own social health is very good because he sees his friends and family every weekend. I think that his health is pretty good, his weight is average for his height and he has an active mind. But he has a downside, as he smokes and has been doing so for 20yrs. He smokes 15 cigarettes a day and spends roughly 20pounds a week on cigarettes. ...read more.

he works 6 days a week, 55hours on nights and 48hours on days. His job is a track maintenance job, he enjoys his job and doesn't rest after work, which he should. He lives in a house in belle vue, he likes the people in belle vue but not the people who walk through it. He likes his house, he has lived there for 7years, he has a house alarm a German Sheppard. His house ha a fire alarm, and when he goes out he locks the windows and doors. He drives, he has a mondeo. He travels to work in a car or a van, the closest transport near him is a bus. Overall I think his health is mixed he has some good pointers and some bad, he exercises a lot and he isn't overweight and his weight is ideal for his height, and the bad points are: smoking, drinking, and not eating enough. ?? ?? ?? ?? Kristen beckett. ...read more.