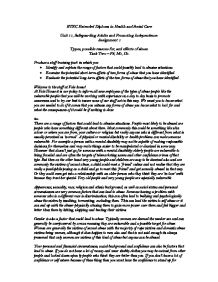 Produce a staff training pack in which you: Identify and explain the range of factors that could possibly lead to abusive situations. Examine the potential short-term effects of two forms of abuse that you have identified.

BTEC Extended Diploma in Health and Social Care Unit 11, Safeguarding Adults and Promoting Independence. Assignment 1 Types, possible reasons for, and effects of abuse. Task Two - P3, M1, D1. Produce a staff training pack in which you: * Identify and explain the range of factors that could possibly lead to abusive situations. * Examine the potential short-term effects of two forms of abuse that you have identified. * Evaluate the potential long-term effects of the two forms of abuse that you have identified. Welcome to the staff at Vale house! At Vale House it is our policy to inform all new employees of the types of abuse people like the vulnerable people that you will be working with experience on a day to day basis to promote awareness and to try our best to insure none of our staff act in this way. We want you to know what you are needed to do if it comes that you witness any forms of abuse you know what to look for and what the consequences of it could be if nothing is done. ...read more.

Very old people and very young people are especially vulnerable. Appearance, sexuality, race, religion and ethnic background, as well as social status and personal circumstances are very common factors that can lead to abuse. Someone having a problem with someone who is a different race is discrimination, this can often lead to bullying and psychologically abuse the victim by insulting, tormenting, excluding them. This can lead the victim to self abuse or it can end up with the abuser physically abusing them to gain more power over them and feel bigger and better than them by hitting, slapping and beating their victims. Gender is also a factor that could lead to abuse. Typically women are deemed the weaker sex and can generally be overpowered by a man meaning they are vulnerable and a possible target for abuse. Women are generally the victims of sexual abuse with the majority of rape victims and domestic abuse victims being women, although it does happen to men also and that is not said enough its always presumed that only women are victims of this kind of abuse but anyone can be abused. ...read more.

This is what sometimes causes domestic violence to become a serious problem when the violence and dominance continues frequently. The victim will have recurrent unexplained injuries and will try to cover and disguise them. Their personality, their past, if they've been abused in previous years, their personal journey, where they have come from, the kind of opportunities they have had and the situations and circumstances they have been in are also factors that can influence abuse. They could have been abused in childhood and it continued into adulthood, being convinced into thinking that it was okay for it to happen and feel like they are only worthy of being abused like this because that's what they have been made to believe by the abuser that is controlling them. If they're a shy person, who's not had a good up bringing or a good life and finds a partner that they think supports them and makes them feel loved but sometimes the more dominant partner will take advantage and abuse the trust and the relationship as well as psychologically, physically, sexually abusing the weaker person in the relationship. ...read more.