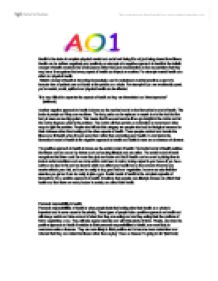 Health is the state of complete physical mental and social well being it is not just being absent from illness. Health can be defined negatively and positively an example of a negative approach to health is the holistic concept of health considers the whole person rather than just concentration on the one problem that they may have. It recognises that every aspect of health can impact on another. For example mental health can affect our physical health. Holistic concept of health is becoming increasingly used in mainstream medical practice as part of a broader view of patient care as it looks at the person as a whole. For example if you are emotionally upset, you're mental, social, spiritual and physical health can be affected. "It is very difficult to separate the aspects of health as they are interrelated and interdependent" (textbook) Another negative approach to health is known as the medical model or the biomedical model of health. This looks at people as if they are machines. The body parts can be replaced or repair due to the fact that the body is seen as one big system. This means that if we ever become ill we go straight to the doctor and let the doctor diagnose what is the problem. The doctor will then provide a medication or recommend other ways to fight the problem. ...read more.

These are people who smoke binge drink and take drugs that have not been subscribed to them. These people tend to suffer more often for illness and are more likely to take the negative approach the illness. It is a well-known fact that people who smoke tend to come from a more disadvantaged background than the average person. "29% of men and 28% of women smoked, but only 2% of professional men and 11% of professional women smoked, compared with 41% of unskilled male workers and 36% of unskilled women workers." http://news.bbc.co.uk/1/hi/health/222649.stm "The poor are also twice as likely to have drink problems as the rich. Seventeen per cent of poor men and 6% of poor women has an alcohol problem, compared with 8% of rich men and 3% of rich women." http://news.bbc.co.uk/1/hi/health/222649.stm from these statistics it is clear that factors such as income, housing, lifestyle and education can have an affect on whether people chose to smoke, binge drink and take drugs. Illness and wellness continuum Moving from the centre to the left shows a progressively worsening state of health. Moving to the right of centre indicates increasing levels of health and wellbeing. The more you move to the left the nearer you become to premature death. A person may develop signs of a disease and go to the doctor to receive treatment and the treatment works and gets rid of the signs so the person goes back to normal point. ...read more.

Emotional and social health are linked closely together is link together. Emotional health consists of being able to express your emotions whether they are negative or positive it is being able to enjoy a laugh and being able to relate to others and having a good self-esteem. If you lack in any factors of emotional health you it can end up affecting your social health. For example if you have a low self-esteem you are more likely to find it harder to interact with friends and other people outside the family circle and this can affect your physical health causing depression. Your physical, emotional and social health can all be affected by you intellectual health. Typically people think of intellectual health as academic knowledge, but in fact, it also entails creativity, general knowledge, and common sense. Our thoughts are influenced by each of these factors, which in turn influence our decisions. It's not only our IQ that matters when it comes to decision making, often times our general knowledge and common sense are more important. http://ccda-pcom.org/seekhealth/intellectual_files/int.htm This is about having manners and having curiosity. Education plays a big role in intellectual health seeing that education can help to keep people intellectually stimulated and when awareness and education are brought together the person is on their way to high levels of wellness. So therefore if you have a high level of intellectual health you are more likely to have a better state of physical emotion and social health as you understand what each health involves and how you look after it. ...read more.

This essay is at a basic level in terms of A level work. Having marked this particular segment of A level for several years, I am aware of what is required and I do not feel that the writer has really looked at the marking criteria in order to check what is needed. There are some good pieces of descriptive work but they feel a little disjointed and the writer has not related them to the topic. It always helps to plan an essay of this nature in order to see the links as this will help to raise grades. A good start but much more research required.