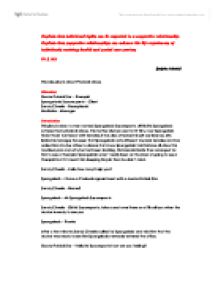 Explain how individual rights can be respected in a supportive relationship. Explain how supportive relationships can enhance the life experiences of individuals receiving health and social care services P1 & M1 Bukola Adedeji This role play is about Physical abuse Characters Doctor Patrick Star - Therapist Sponge bob Square pants - Client Sandy Cheeks - Receptionist Mrs Krabs - Manager Introduction This play is about a man named Spongebob Squarepants. All his life Spongebob suffered from physical abuse. His mother always used to hit him, now Spongebob finds it hard to interact with females; it has also affected his self confidence. Mrs Krabs his manager has seen that Spongebob acts different towards females and has called him into her office to discuss his future. Spongebob told his boss all about his troubled past and why he had been slacking. His boss Mrs Krabs then arranged for him to see a therapist, Spongebob wasn't really keen on the idea of going to see a therapist but if it meant him keeping his job then he didn't mind. Sandy Cheeks - Hello how may I help you? Spongebob - I have a 2'oclock appointment with a doctor Patrick Star Sandy Cheeks - Name? Spongebob - Mr Spongebob Squarepants Sandy Cheeks - Ok Mr Squarepants, take a seat over there and I'll call you when the doctor is ready to see you Spongebob - Thanks After a few minutes Sandy Cheeks called for Spongebob and told him that the doctor was ready to see him Spongebob nervously entered the office. Doctor Patrick Star - Hello Mr Squarepants how are you feeling? Spongebob - Fine Doctor Patrick Star - Your boss has informed me that you have some issues at work to you wish to explain this? Spongebob - I don't like females Doctor Patrick Star - so you don't like females why do you think this is? ...read more.

Sexual Abuse: inappropriate touching, forced sexual contact, unwanted sexualized behaviour, photographing individuals in suggestive positions, forced viewing of pornography and other non-consensual sexual activity. Vulnerable adults, who do not wish to make a complaint, or be involved in an investigation of alleged abuse, have the right of refusal. Even in cases where the adult is not considered capable of giving their informed consent or agreement their advocate might feel it is not in their best interests to have the matter pursued. Supported flats for people living in the community who have learning disabilities People with learning disabilities may live in the community in supported houses that are not staffed at night. They can become prey to local teenagers and young adults who take advantage of their open, trusting nature and use their accommodation as a drop in and a place to have drinking parties, etc. The service user finds they are swept up in the activities and are unable to control the situation. Neighbours may act as informal carers and develop an abusive relationship because of the imbalance of power in the relationship. People with learning difficulties tend to be over-complaint and to accept whatever happens to them. They have low expectations and low-self esteem. Their illness, condition or age tends to make them isolated and limit their social networks. As a result they become dependent on their abusers, or potential abusers, for help, services and social interaction. Being vulnerable increases the fear of retaliation from the abuser. Service users can blame themselves for their abuse and believe they have deserved it. The abuser can reinforce this. A home care service that provides home support for physically disabled people living in their own homes. Living alone, and depending on others, can be isolating for people who have limited social networks. They may find their main social contact is with their carers. Such isolation and dependency can increase the vulnerability of an individual who is confused, frail or has a learning disability. ...read more.

Also mentioned were: identification of adult's needs, access to grants or practical resources for families, and improved parent-child relationships through parenting skills and strategies acquired through BEST interventions. Other commonly identified outcomes of multi-agency work are: * Access to services not previously available, and a wider range of services * Easier or quicker access to services or expertise * Improved educational attainment and better engagement in education * Early identification and intervention * Better support for parents * Children's needs addressed more appropriately * Better quality services * Reduced need for more specialist services Benefits for staff and services Practitioners with backgrounds in single, traditional agencies report high levels of satisfaction with multi-agency working. In particular, they feel liberated from the narrow bureaucratic and cultural constraints of their parent organisation. Where the initial bedding down phase is well-managed, they find the potential for cross-fertilisation between the different agencies stimulating; and many value the opportunity to take a more holistic approach to the needs of children. Schools delivering extended services have identified opportunities for staff to work flexibly and for support staff to access more career development opportunities. Where there are swift referral systems to multi-agency support, extended schools have seen improvements in staff recruitment, retention and workload. They also provide opportunities for enhanced partnership working with the community and better school security. Working within a BEST was described as having been a rewarding experience for the majority of the practitioners interviewed. Many of the positive impacts reflected those cited more generally as benefits of multi-agency working. Most commonly mentioned was professional development: opportunities to share expertise and learn from colleagues through discussion of casework and joint delivery of interventions. The On Track evaluation identified positive impacts for staff. These were primarily associated with new ways of working within multi-agency teams, in particular: * Less replication between different service providers * Better links between service providers, including a greater understanding of their practices * Professional development and career progression opportunities * More involvement in community development * Improved awareness of different services and changed public perceptions of service providers ...read more.