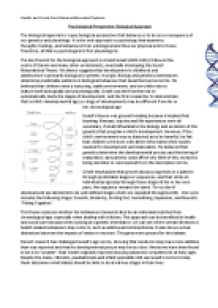 Transfer-Encoding: chunked ﻿Health and Social Care National Extended Diploma Psychological Perspective: Biological Approach The biological approach is a psychological perspective that believes us to be as a consequence of our genetics and physiology. It is the only approach in psychology that examines thoughts, feelings, and behaviours from a biological and thus our physical point of view. Therefore, all that is psychological is first physiological. http://www.godandscience.org/images/dna-helix.gif The key theorist for the biological approach is Arnold Gesell (1880-1961) followed the works of Darwin and many other evolutionists, eventually developing the Gesell Maturational Theory. His theory suggests that development in childhood and adolescence is primarily biological or genetic in origin. ...read more.

may be different from his or her chronological age http://www.gesellinstitute.org/wp-content/uploads/2013/05/gesell-theory-image.jpg Gesell?s theory was ground breaking because it implied that learning, illnesses, injuries and life experiences were all secondary, if at all influential to the biology and evolution of the genetics that program a child?s development. However, if the child?s environment was so distorted as to be harmful, he felt that children were born with all the information their bodies needed for development and maturation. He believed that genetics determine the developmental process and the timing of maturation, and parents could affect very little of this, except by being sensitive to cues learned from the descriptive norms. ...read more.

This approach can be beneficial in health and social care because when looking at a genetic inheritance, we can see where certain illnesses or health related behaviours may come in, such as asthma and schizophrenia. It also shows a clear distinction between the impacts of nature vs nurture. This gives more ground for the debate. Recent research has challenged Gesell?s age norms, showing that newborns may have more abilities than was reported and that his developmental picture may be too slow. Newborns have been found to be a lot ?smarter? than Gesell originally reported showing advanced competencies at early ages. Despite the many criticisms, paediatricians and infant specialists still use Gesell?s norms to help them determine what babies should be able to do at various stages in their lives. ...read more.