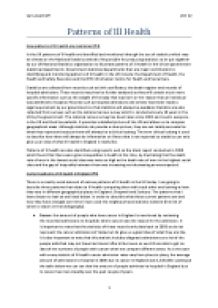 ﻿Ian Lowenhoff Unit 12 Patterns of Ill Health ________________ How patterns of ill health are monitored (P3) In the UK patterns of ill health are identified and monitored through the use of statistics which may be viewed on the National Statistics website. Responsible for producing statistics to be put together by our UK National Statistics organisation to illustrate patterns of ill health in the UK are government statistical departments. Government statistical departments that are major contributors to identifying and monitoring patterns of ill health in the UK include: the Department of Health, the Health and Safety Executive and the NHS Information Centre for Health and Social Care. Statistics are collected from records such as birth certificates, the death register and records of hospital admissions. These records may then be further analysed as they will contain much more specific information such as the weight of the baby that was born or the reason that an individual was admitted to hospital. Records such as hospital admissions and arrests have been made a legal requirement by our government so that statistics will always be available. Statistics are also collected from surveys such as the national census survey which is conducted every 10 years in the UK by the government. The national census survey has been taken since 1801 and counts everyone in the UK and their households. It provides a detailed picture of the UK and allows us to compare geographical areas. Although statistics do provide a clear picture, they are not totally accurate for what they represent because there will always be a clinical iceberg. The term clinical iceberg is used to describe how there will always be information on illness that is not reported so statistics can only give us an idea of what ill health in England is really like. Patterns of ill health are also identified using reports such as the black report conducted in 1980 which found that there were gross inequalities in health at the time, by illustrating that the ...read more.

What sexuality an individual is does affect an individual?s physical health but it can mainly affect an individual?s mental health. Physically being sexually active whether it is homosexual or heterosexual does have risks such as STIs, HIV and unwanted pregnancies. Mentally being homosexual can be very hard to deal with for some people because of the discrimination and prejudice homosexual individuals currently face from society. The difficulties of ?coming out? are illustrated in this video from youtube: http://www.youtube.com/watch?v=rw48_tAeSKw&feature=player_embedded The stress of coming out to friends and family can be so great that individuals suffer from depression. Thankfully homosexuality is usually accepted now in our society in England in this day and age. Unfortunately homosexuality is not always accepted and this is the case especially for religious families where homosexuality is a grave sin. If homosexuality is not accepted than individuals can find themselves being homeless and feel rejected by society. Young gay men have the highest rate of suicide of all groups due to feeling rejected by society. Cystic Fibrosis Cystic Fibrosis is a genetic disorder caused by a recessive allele. For an individual to be born with the disorder both their parents need to carry the recessive allele. If a couple who both have the recessive allele decides to have a baby then the chance of their baby being born with Cystic Fibrosis is rare at a 1 in 4 chance. Cystic Fibrosis badly affects the internal organs clogging them up with sticky mucus, making it hard for the individual with the disorder to breathe and digest their food. Unfortunately Cystic Fibrosis is a progressive disorder and currently there is no cure for it and the average life expectancy for an individual with the disease is 31. Although there is no cure for the disorder treatment is available so that individuals may stay as healthy as possible. Treatments available include eating a healthy diet, exercising, physiotherapy treatment and medicine treatment. ...read more.

The campaign had previously featured on television and radio in the UK and is called ‘The Shattered Lives’. The campaign aims to raise awareness so people may take precautions and actions to prevent accidents from happening such as slips, trips and falls. Some people believe that our government regulate our health too much and that they are a ‘nanny state’ - meaning they are always telling us what to do and do not let us make our own decisions. Personally I disagree with this statement because I believe our government is a ‘welfare state’ not a ‘nanny state’. If you compare the UK to a country like the USA where the drinking age is 21 in most states then we are not a ‘nanny state’. Our government still lets us make our own decisions about whether we smoke but they make it harder to do so which is a good thing because smoking is evidently bad for your health. In conclusion I believe the government has had a very good influence on the population’s health in the UK thanks to initiatives such as new legislation and new health campaigns. The government’s most positive influences on patterns of health in the UK over the past 50 years have been on smoking, driving and obesity. We have also learned that the government is also planning to release future health campaigns to tackle accidents. However I think the government needs to address the current alcohol epidemic that is spreading across the UK and this is a negative point about what the government has not done enough about. Admissions to hospital because of alcohol have been costing our NHS billions and according to the BBC if something does not change soon then these admissions could be costing us £3.7billion by 2015. Besides hospital admission rates rising, deaths because of alcohol related liver disease has also been on the up and this is why I think the government needs to focus more on alcohol campaigns and possibly even legislation before alcohol becomes a major problem. ...read more.