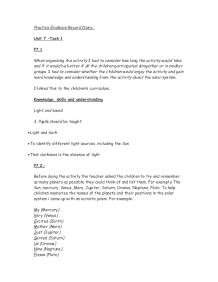 Reflective accounts - I had to consider whether the children would enjoy the activity and gain more knowledge and understanding from the activity about the solar system.

Practice Evidence Record Diary. Unit 7 -Task 1 P7.1 When organising the activity I had to consider how long the activity would take and if it would be better if all the children participated altogether or in smaller groups. I had to consider whether the children would enjoy the activity and gain more knowledge and understanding from the activity about the solar system. I linked this to the children's curriculum. Knowledge, skills and understanding Light and sound 3. Pupils should be taught: * Light and dark * To identify different light sources, including the Sun * That darkness is the absence of light P7.2- Before doing the activity the teacher asked the children to try and remember as many planets as possible they could think of and list them. For example The Sun, mercury, Venus, Mars, Jupiter, Saturn, Uranus, Neptune, Pluto. To help children memorize the names of the planets and their positions in the solar system i came up with an acrostic poem. For example: My (Mercury) Very (Venus) Excited (Earth) Mother (Mars) Just (Jupiter) Served (Saturn) Us (Uranus) Nine (Neptune) Pizzas (Pluto) After the children remembered the planets the teacher told them some of the following facts about the planets such as: * The planets in our Solar System are held in place by the Sun's gravity. ...read more.

I think by getting involved myself it made the children more focused and excited about making the solar system themselves. Overall the activity went well as the children made a completed model of the solar system and gained more knowledge from the activity and they could remember the planets in order because of the acrostic poem we came up with. P7.1 - When organising the second activity I had to consider whether all children could take part and whether or not they would work better in smaller groups rather than a whole class. I had to consider whether the children would enjoy the activity and gain more knowledge and understanding from the activity about light and dark. P7.2 - Before doing the activity I explained to the children that the eye is a receptor of light, not a source of it, and we can see because light is reflected from everything to a greater or lesser extent. (Best from mirrors, shiny and white surfaces; poorly from black and dark surfaces). For one part of the activity to do with exploring light and dark, the children went outside and explored their own shadows and other objects such as animals. The children worked in pairs and drawed round each other's shadows one at a time on the playground with chalk and they also worked with other objects such as animals and drawed around the animals shadow on the ground also with chalk and tried to identify each other's drawing afterwards. ...read more.

all the children to put on their book bags and explaining to them the importance of road safety and making yourself clear to drivers and to always look before crossing the road. The reflective stickers are essential as they help children to be able to be seen in the dark and therefore is safer for them overall. Another activity/experience I was involved in was making our own traffic lights with the children and reminding them it isn't safe to cross the road at red and it isn't always safe to cross when the lights on amber and only when it's on green it is safe. Also I explained to the children when using a zebra crossing you should always 'Stop, Look and Listen' before crossing the road. Furthermore I explained to the children the dangers of stepping into the road from between parked vehicles as you may not be able to see in every direction and that's why it is important to always cross the road at either traffic lights or a zebra crossing. P7.9 - From this activity/experience I think the children gained more knowledge and understanding of road safety and how to cross the road in a safe way as the activity we done was very effective in promoting the importance of road safety to all of the children and therefore will be something they think about when crossing the road. ...read more.

This is a good essay but is a little basic in its content. The writer has some excellent activities but really only describes rather than reflects.

This could be extended by trying to fully discuss the activity and what went well. It could be further enhanced by trying to link in a bit of educational psychology too. There's is plenty out there if you do the research.