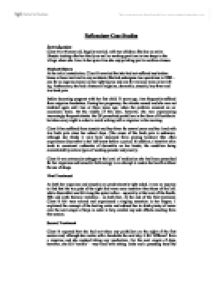 Reflexology Case Studies Introduction Client B is 40 years old, happily married, with two children. She has an active lifestyle looking after her family as well as working part time in two shops in the village where she lives. In her spare time she enjoys taking part in aerobics classes. Medical History At the initial consultation, Client B revealed that she had not suffered any broken bones or been involved in any accidents. She had undergone two operations in 1998 - one for an ingrown toenail on her right big toe and one for varicose veins in her left leg. Furthermore, she had a history of migraine, dermatitis, sinusitis, hay fever and low back pain. Before becoming pregnant with her first child 13 years ago, Ann frequently suffered from migraine headaches. During her pregnancy, the attacks ceased and she was not troubled again until two or three years ago, when the problem recurred on an occasional basis. ...read more.

while discomfort was felt along the spinal reflex - especially at the level of the fourth, fifth and sixth thoracic vertebrae - on both feet. At the end of the first treatment, Client B felt very relaxed and experienced a tingling sensation in her fingers. I explained the concept of the healing crisis and advised her to drink plenty of water over the next couple of days in order to help combat any side effects resulting from this session. Second Treatment Client B reported that she had not taken any painkillers on the night of the first session and, although she awoke with a headache the next day, it felt 'different' from a migraine and she resisted taking any medication. For the next couple of days, however, she felt 'terrible' - very tired with aching limbs and a pounding head but found that these symptoms gradually disappeared over the course of the week.. During the assessment of her feet at this session, it was clear that the sensitivity in her reflexes had reduced enormously. ...read more.

She was hugely encouraged by the positive results and, having continued to make good progress over the ensuing weeks. Looking at each of client B symptoms in turn, it can be seen that Reflexology has, indeed, achieved the goals it set out to meet. Over the last 4 weeks, client B has received four treatments in total and, in that time, She has not had a migraine attack since beginning the course of treatment and, although she still experiences headaches from time to time, the pain is mild and of short duration. She has not been bothered greatly by hay fever or sinusitis this year and her left breast, which is usually quite tender before a period, has given her little discomfort. The pain in her lower back - most often felt when tired or when lifting - has also diminished greatly. Conclusion This study demonstrates how important a role Reflexology can play with regard to restoring and maintaining health in a non-invasive, non-chemical way. The client is now drug free and, for the most part, pain free with the result that she is a happier, more energised and positive individual. ...read more.