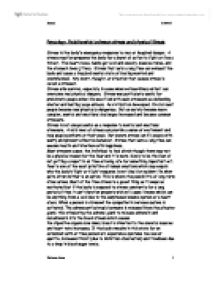 Relationship between stress and physical illness

Psycology, Relationship between stress and physical illness Stress is the body's emergency response to real or imagined danger. A stress reaction prepares the body for a burst of action to fight or flee a threat. The heart races, hands get cold and sweaty, muscles tense, and the stomach feels jittery. Stress that lasts a long time can exhaust the body and cause a frazzled mental state of feeling worried and overwhelmed. Any event, thought, or situation that causes stress is called a stressor. Stress aids survival, especially in cases when extraordinary effort can overcome real physical dangers. Stress was particularly useful for prehistoric people when life was filled with such stressors as defending shelter and hunting large animals. As civilization developed, life for most people became less physically dangerous. But as society became more complex, mental and emotional challenges increased and became common stressors. Stress is not always useful as a response to mental and emotional stressors. A mild level of stress can provide a sense of excitement and help people perform at their peak. ...read more.

the activities of the Parasympathetic system may increase to balance it out again instead of the Sympathetic system going down and returning to normal. This makes the bodily fuctions speed up so the sufferer now has a increase in apetite be cause the digestive system is working too fast (this can also produce 'wind') and faster heart beat than normal, blood pressure may also rise. However the main way in which stress can cause illness is due to supression of the imune system. Immune system is made up of special cells, molecules, and tissues that help defend the body against diseases and other harmful invaders. The immune system provides protection against a variety of potentially damaging substances that can invade the body. These substances include disease-causing organisms, such as bacteria, fungi, parasites, and viruses. The body's ability to resist these invaders is called immunity. The main function of the immune system is to destroy foreign invaders while leaving the body's own healthy tissues alone. Sometimes, however, the immune system attacks and damages these healthy tissues. This reaction is called an autoimmune response or autoimmunity. ...read more.

They are bunched in certain areas, especially the neck and armpits. Lymph nodes filter out harmful particles and bacteria from a network of vessels called the lymphatic system. When the body is fighting an infection, the lymph nodes may swell and become painful. The stress response causes the supression of the imune system and inhibits the production of leucocytes making the body more vunrable to disease. Researchers found that the highly stressed women had lower levels of natural killer cells than women who reported less stress. Natural killer cells are one vital weapon making up the immune system. "Natural killer cells have an extremely important function with regard to cancer because they are capable of detecting and killing cancer cells," said Barbara Andersen, leader of the research team and professor of psychology and obstetrics and gynecology at Ohio State University. "These results, although preliminary, suggest that psychological stress may play a role in how the immune system responds to cancer." Andersen presented the results August 13 in New York. Allthough so far sciance has onley proved there is a coralation between stress and illness it is too obviouse and important to be ignored. ?? ?? ?? ?? Rachel 27/04/07 Rebecca Jones 1 ...read more.

This essay aimed to discuss the relationship between stress and ill-health. A definition of stress is given and there was a reasonably good explanation given as to how it impacts negatively on health. At one point there was a lot of science talk regarding cells, which, if this is what the requirement of the essay was, is fine. If not, remember the keep the essay title in mind as you write.
The writing style was good overall but there were several spelling errors which could be minimised by careful proof-reading. Remember to include a list of references at the end of the work. Make sure the work finishes with a brief conclusion, reminding the reader of what you have covered.
3/5