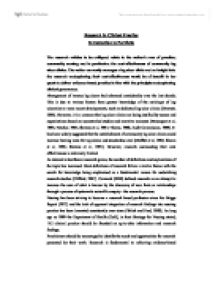 Research In Clinical Practise Introduction to Portfolio The research articles to be critiqued relate to the author's area of practice; community nursing and in particular; the cost-effectiveness of community leg ulcer clinics. The author currently manages a leg ulcer clinic and an insight into the research underpinning their cost-effectiveness would be of benefit in her quest to deliver evidence-based practice in line with the principles underpinning clinical governance. Management of venous leg ulcers had advanced considerably over the last decade. This is due to various factors from greater knowledge of the aetiology of leg ulceration to more recent developments, such as dedicated leg ulcer clinics (Dowsett, 2004). However, it is a concern that leg ulcer clinics are being justified by nurses and organizations based on uncontrolled studies and narrative accounts (Bosanquet et al, 1993; Fletcher, 1995; Stevens et al, 1997; Thorne, 1998; Audit Commission, 1999). It has been widely suggested that the establishment of community leg ulcer clinics could increase healing rates for leg ulcers and standardise care (Moffatt et al, 1992; Simon et al, 1996; Stevens et al, 1997). However, research surrounding their cost effectiveness is extremely limited. As interest in healthcare research grows, the number of definitions and explorations of the topic has increased. Most definitions of research follow a similar theme with the search for knowledge being emphasised as a fundamental reason for undertaking research studies (Clifford, 1997). Cormack (2000) defined research as an attempt to increase the sum of what is known by the discovery of new facts or relationships through a process of systematic scientific enquiry - the research process. Nursing has been striving to become a research based profession since the Briggs Report (1972) and the lack of apparent integration of research findings into nursing practice has been lamented consistently ever since (Walsh and Ford, 1989). As long ago as 1989 the Department of Health (DoH), in their Strategy for Nursing stated; 'All clinical practice should be founded on up-to-date information and research findings. ...read more.

For the reader, reservations regarding the validity and reliability of results from this questionnaire must be made. The methodology section, overall, fulfils the aims set within the Cormack framework (2000). In contrast, the design methods utilised by Simon et al are not so transparent. They are described as 'detailed cost and efficacy studies' and appear to fall into the classification of case-control study designs, within the sphere of descriptive research methodology. The aim of descriptive research is to discover new facts about a situation, people, activities or events or the frequency with which certain events occur (Cormack, 2000). A case-control study is one in which a group of cases is identified. A second group of controls is then selected. The two groups can then be compared with respect to a particular variable (Cormack, 2000). It seems from the information that the method of 'case-control study', chosen by Simon et al, was appropriate to the research problem. Simon et al do not state the strengths and weaknesses of the approach, nor do they include an overall description of the research design or specific details of the proposed methodology. Again, quantitative methods were chosen in favour of qualitative methods. The methodology section from the Simon et al study fails to fulfil the aims within the Cormack framework (2000) by its ambiguity. However, it contains fewer flaws and purports to represent a valid example of descriptive research. Subjects and Sample Selection Crookes and Davies (1998) define subjects as 'individuals participating in a study'. The Cormack framework (2000) asks whether the sample selection approach is congruent with the method to be used and whether the approach to sample selection and sample size is clearly stated. Researchers have many sampling choices available to them that stem from theory or method or from simple practicalities such as time and money. A sample, therefore, should be chosen purposefully and many sampling strategies can be used. ...read more.

Recent systematic reviews and the resulting clinical practice recommendations (NHS Centre for Reviews and Dissemination 1997, RCN Institute Centre for Evidence-Based Nursing University of York and School of Nursing Midwifery and Health Visiting University of Manchester 1998), have established a strong foundation for quality nursing care, to the extent that leg ulcer practice has become a touchstone of the quality of nursing care and is a primary focus of the ongoing National Sentinel Audit. These recommendations represent an attempt to produce the clearest picture possible with a mosaic of individual pieces of research, each of which has limitations and sometimes, contradictory conclusions. Each study is the culmination of the efforts of a team of researchers and clinicians, representing years of work. The picture, however, is far from complete. The evidence available is of variable quality and it is not always clear how different pieces fit together. Some pieces remain unsubstantiated, or are based on the results of small numbers of patients, and so there is a need for further research to substantiate findings. Indeed, one of the fundamentals of evidence-based practice is that the evidence must be continually renewed so that it does not become 'out of date'. Since, until fairly recently, the delivery of community leg ulcer care in patients' homes was the norm, the introduction of leg ulcer clinics provided an opportunity to evaluate their intervention. For many, this opportunity has now passed, but those considering establishing such clinics should note that the practice is not clearly supported by evidence and should, ideally, be subjected to evaluation that is more rigorous. It should be remembered that good nursing practice is based on evidence and that the best evidence comes from high-quality research. It should also be remembered that not all research is high quality. Critical analysis and evaluation are vital. McSherry (2000) believes that the need to base practice on the best possible evidence is vital if nurses are to meet the challenges of providing quality care. ...read more.