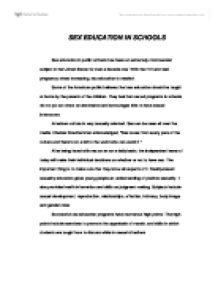 Sex education in public schools has been an extremely controversial subject in the United States for over a decade now. With the HIV and teen pregnancy crises increasing, sex education is needed.

Some of the American public believes that sex education should be taught at home by the parents of the children. They feel that sex ed programs in schools do not put an stress on abstinence and encourages kids to have sexual intercourse.

American culture is very sexually oriented. Sex can be seen all over the media. Charles Krauthammer acknowledged, "Sex oozes from every pore of the culture and there's not a kid in the world who can avoid it.”

After being faced with sex on an on a daily basis, the independent teens of today will make their individual decisions on whether or not to have sex. The important thing is to make sure that they know all aspects of it. Reality-based sexuality education gives young people an understanding of positive sexuality. It also provides health information and skills on judgment making. Subjects include sexual development, reproduction, relationships, affection, intimacy, body image and gender roles.

Successful sex education programs have numerous high points. The high points include exercises to promote the appraisals of morals, and skills in which students are taught how to discuss while in sexual situations.

The majority of this nation favors sexuality education in public schools. Surveys show that eighty-nine percent of the citizens support it. Should the other eleven percent of the country be able to make a decision upon what the children of the United States learn and not learn in public schools? The eleven percent's only argument against sex education is that they feel that sex education encourages teens to try out sex. This logic is based on absolutely nothing. There is no evidence that proves that sex education causes anything negative. This country is a democracy.

A study conducted on teens in Sweden and the Netherlands showed that teens in those countries were just as sexually active, but the teen pregnancy and sexually transmitted disease rate was much lower. Researchers say this is due to sex education that begins in elementary school and continues on. Only ten percent of American school-age adolescence participate in a comprehensive program lasting at least forty hours. Teens in America also score low on questionnaires based on sexual facts. With all the information and resources at its fingertips, the U.S. could teach the same kind of classes that are being conducted in Sweden and the Netherlands.

Some also feel that sex education should be taught at home by parents. That's fine, except there is no assurance that kids will be taught. In a formal survey of 8,000 college students over 12 years, fewer than eighty percent had received a meaningful sex education from their parents. A survey of one hundred students at Herbert Hoover High School showed that only fourteen percent had been spoken to by their parents about abstinence and/or contraception. Many children feel that parents are the least helpful source for information concerning birth control and sexually transmitted diseases. With no guarantees and the children's view of their parents' knowledge, "Generation X" could be put at a higher risk if parents were left to educate their children on sexuality.

Since 1981, the year the HIV epidemic began, adolescents have been accounted for twenty percent of new infections. HIV stands for human immunodificiency virus. It is a blood borne virus that is transmitted when a person comes into contact with contaminated body fluid. This includes unprotected sex. Condoms that are made of latex are one way to protect against contracting or transmitting the virus if the person chooses to have sex.

Only a small number of teens infected with HIV actually know they have it. If teens take risks of having unprotected sex with their partner because they are sure" their partner" doesn't have the virus, they are putting themselves at an even greater risk and the HIV crisis could grow. Fifty-seven percent of U.S. teens have sex by age seventeen and usually with more than one partner. Sex education could teach young people precisely how risky unprotected sex is and the possible costs.

The opponents of sex education believe that it does not enhance human life. How can that be so when it can help save lives? There are also many myths about the HIV virus such as it is a "homosexual disease" and an" IV drug user's disease". Sex education could also inform students that everyone can be infected.

Teen pregnancy is also a problem in the U.S. It is stated that 1.2 million teens become pregnant each year. This could be caused by the children's lack of knowledge. Less than one in seven teens use protection the first time they participate in intercourse. Every day three thousand teenage girls become pregnant.

In conclusion, the risk of STDs and teen pregnancy is an extremely urgent and practically irreversible problem. The key is preventing it.